Grant Williams calls out Celtics' defense, says team has to be 'more 'physical' 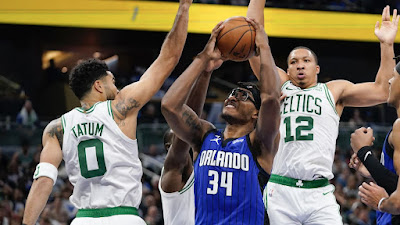 The Celtics identity last season was their defense, which ranked them No. 1 in the league, allowing 106.2 points per 100 possessions -- according to NBA.com.
Through the team's first three game this past week to start the 2022-23 campaign, they are allowing 116.8 points per 100 possessions -- placing 25th in defensive rating so far.
Despite the Celtics being 3-0, forward Grant Williams called out his teammates over their defensive struggles, following Boston's 126-120 victory over the Orlando Magic Saturday night.

"We just had to be more physical. We didn't do our job tonight from the start," Williams said in postgame presser. "We allowed them to get comfortable. When teams are comfortable, they make shots, but especially when I'm at the center position. Even then, I have to do a better job of making sure that not only to keep the ball in front, but also just make sure we rebounds, make sure that we’re physical both on the ball defending it and off."

Williams also noted that the Celtics, who were without Al Horford (lower back) and of course Robert Williams (knee), can't take any opponent for granted -- regardless of who they're playing against on any given night.

"That's probably the biggest challenge for us. Coming in every night with the same focus and intensity and make sure we're mature enough to understand that every team is capable of beating you every single night and not taking anyone lightly," Williams added.

Orlando out-rebounded the Celtics 48-37, including grabbing 12 offensive boards that were converted into 22 points for the Magic and they also had seven blocks on the night.
While Boston is undefeated, Williams has also gotten off to his best start of his young career. The 23-year-old big is averaging 12.7 points on 85.7% from the field and 80% from beyond the 3-point arc to go along with 4.7 rebounds through three games.
The Celtics end their first road trip of the season Monday night when they face the Chicago Bulls. Tip-off is at 8:00 PM ET.
Joel Pavón
Follow @Joe1_CSP