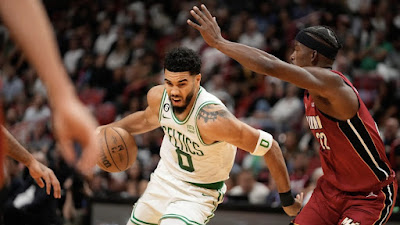 The Celtics picked up where they left off in Game 7 of the Eastern Conference Finals in Miami, as they defeated the Heat 111-114 Friday night at FTX Arena.
Jayson Tatum led all scorers with 29 points on 10-of-22 from the field and Jaylen Brown shot 12-of-18 to finish with 28 points in Boston's second straight win to start the season.

"We've got a great team and we're still trying to figure each other out," Tatum said in his ESPN postgame interview. "And I love playing against the Heat. We've got some history here the last couple years, and they push you. They make you a better team. They’ve got a lot of fire, a lot of great players, a great coach."

The Celtics outscored Miami 42-24 from beyond the arc, despite turning the ball over 20 times. They also connected on 51.9% of their attempts from the floor.
Tyler Herro finished with 25 points, while Bam Adebayo recorded 19 points and eight rebounds for the Heat, who are 0-2 so far. Jimmy Butler added 18 points on 9-of-17 shooting and Kyle Lowry chipped in 17 points and six assists in a losing effort.
Boston was ahead by as many as 11 points in the first half, taking a 59-51 advantage into the break. After back-to-back baskets by Brown to open up the third, the Heat went on a 20-6 run to grab a 71-69 lead -- the first since the opening quarter.
Adebayo went to the bench once he picked up his fourth foul and a technical with 5:12 left in the period, which allowed the Celtics to go on a 20-6 spurt of their own. Tatum scored eight points during that stretch, while Grant Williams (10 points, seven rebounds) hit two 3-pointers to cap the run and put Boston up 89-77 heading into the final frame.
Brown scored a pair of baskets that put the C's comfortably ahead 100-86 with 7:30 remaining, as Miami had one more rally left -- going on a 9-0 run and forcing four turnovers to cut the deficit to five in that span with 4:12 left to play.
Tatum stopped Boston's scoring drought of nearly four minutes with two clutch baskets in the paint, plus added to the Celtics 8-4 run with a pair of made free throws, before Al Horford (nine points, 5 rebounds) nailed a dagger corner 3 that gave the visiting team a 111-101 lead in the final 26.2 seconds to put away the Heat for good.

"Our guys love playing defense," interim coach Joe Mazzulla said in postgame presser. "And any time you have a group of guys who love defense, you have a chance to be special."

The Celtics head to Orlando Saturday night to face the Magic (0-2) in their first back-to-back of the season. Tip-off is at 7:00 PM ET.

Miami shot 45.7% from the field and 8-of-26 (30.8%) from behind the arc, while the Celtics were 14-of-33 (42.4%) from deep. Boston outscored the Heat in the paint 52-46 and won the rebound battle 43-36. The C's also had 17 assists on 41 made buckets and Miami had 23 dimes on 42 made attempts.
After combining for 70 points against the 76ers on Tuesday night, Tatum and Brown become the second pair of teammates in franchise history to record 25-plus points in their first two games of the season, since Larry Bird and Robert Parish back in 1984.
Joel Pavón
Follow @Joe1_CSP