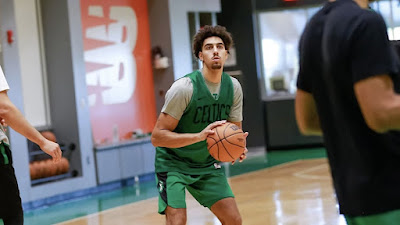 The Celtics have signed Brodric Thomas to their training camp roster, according to NBA insider Keith Smith.
The 6-foot-5 undrafted guard returns to Boston where he signed on a Two-Way deal last season. In 12 games played, Thomas averaged 1.8 points, 0.9 assists, and 0.8 rebounds while shooting 44.4% from the field and 22.2% from three. Due to the two-way contract, Thomas was ineligible to play in the postseason.
Thomas, 25, also played for the Celtics during the 2022 Las Vegas Summer League, averaging 13.3 points, 5.3 rebounds, and 2.5 assists while shooting 51.6 percent from the field and 52.2 percent from 3-point territory -- including a standout performance of 18 points, five rebounds and two assists in a win against the Golden State Warriors.
With the additon of Thomas, the Celtics have reached the 20-man max capacity for a training camp roster. Despite Robert Williams being out 8-12 weeks following arthroscopic knee surgry and Danilo Gallinari recovering from a torn ACL, there are no plans to sign any big-name free agent centers that are still avaiable, per Jay King of The Athletic. -- who reported this following center Bruno Caboclo being waived by the C's this past Tuesday by the.
The Celtics immediately replaced Caboclo by adding the 22-year-old, 6-foot-10 forward from Croatia Luka Šamanić to their training camp roster Wednesday, according to Bobby Manning of CLNS Media.
Šamanić is coming off a two-way deal with the New York Knicks this past season, though never making an appearance on the main roster, he played in seven games for their G League affliate -- the Westchester Knicks -- where he averaged 27.9 points, 10.6 rebounds, and 3.3 assists while shooting 54.9% from the field before getting cut in March.
Boston has three regular season roster spots left to fill and with Robert Williams and Gallinari sidelined that leaves Al Horford, Grant Williams, Luke Kornet (partially guaranteed deal), Sam Hauser and Mfiondu Kabengele (two-way contract) as their early season frontcourt depth, while Šamanić and Noah Vonleh will battle it out during scrimmages and preseason to show their worth.
Other invites vying for chance to make the main roster include; Jake Layman, Justin Jackson and Denzel Valentine. Celtics begin training camp Tuesday before their first preseason matchup October 2, when they host the Charlotte Hornets.
Joel Pavón
Follow @Joe1_CSP