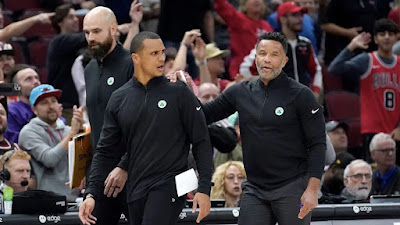 The NBA has rescinded Celtics interim head coach Joe Mazzulla's second technical foul in the team's loss to the Chicago Bulls that led to his ejection Monday night, according to Boston Globe's Adam Himmelsbach.
Mazzulla was ejected from the game with under five minutes left in the third quarter after Bulls center Nikola Vucevic thrashed the ball in disagreement with a call but did not receive a tech. Jayson Tatum argued that Vucevic's motion was similar to the tech he got called for just minutes earlier.
The Celtics coach went to back up Tatum, before referee Marc Davis issued Mazzulla his first technical foul for arguing. When Mazzulla didn't return to the bench area in a timely manner, Davis gave him a second tech, which led to his ejection.

Mazzulla, who will no longer be fined for the second tech and his ejection was also taken away from the league, said during his post-game presser that he "was just trying to get the referee's attention" from across the court, while not using curse words in the process. Still, Mazzulla believes he has "to have better composure under the circumstances."
Despite Mazzulla's ejection and second technical getting rescinded, Celtics big man Grant Williams was not so lucky after receiving a one-game suspension without pay for what the league called "recklessly making contact with and directing inappropriate language toward a game official."
With 8:58 left in the fourth quarter of the Celtics' 120-102 loss to the Bulls, Williams charged toward the team's bench in protest of a foul call and, in the process, bumped into referee Cheryl Flores -- who immediately ejected him from the game.
The Celtics are off until Friday when they host the Cleveland Cavaliers at TD Garden, beginning at 7:30 PM ET.
Joel Pavón
Follow @Joe1_CSP