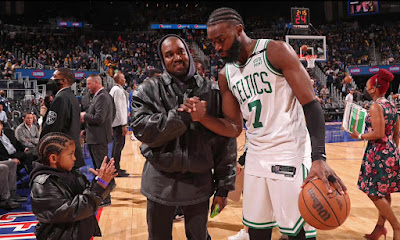 Jaylen Brown has severed ties with Kanye West's agency Donda Sports, according to a statement the Celtics star released Tuesday night.
Brown, who told Boston Globe's Gary Washburn Monday that though he didn't condone West's recent antisemitic comments, he would still remain with the agency he inked a marketing deal with earlier this year.
However, less than a day later, Brown issued a statement via Twitter to clarify his stance and announce that he was terminating his association with Donda Sports effective immediately.

"In the past 24 hours, I've been able to reflect and better understand how my previous statements lack clarity in expressing my stance against recent insensitive public remarks and actions," Brown wrote in his statement. "For that, I apologize. And in this, I seek to be as clear as possible. I have always, and will always, continue to stand strongly against any antisemitism, hate speech, misrepresentation, and oppressive rhetoric of any kind.

"In light of that, after sharing in conversations, I now recognize that there are times when my voice and my position can't coexist in spaces that don't correspond with my stance or my values. And, for that reason, I am terminating my association with Donda Sports."

Brown caused some controversy prior to the statement to end his association with Donda Sports following his quotes in the Globe on Monday.

In his most recent statement, Brown says he hopes to continue to show "mentorship, love and support" to the children that still attend West's Donda Academy.
Brown has been represented by Jason Glushon of Glushon Sports Management since 2019, when he signed his rookie-scale extension. He was without an agent for the first three years of his NBA career prior to the hiring of Glushon for contract negotiations.
Joel Pavón
Follow @Joe1_CSP