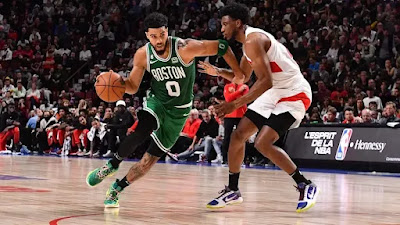 It's been just over four months since the Celtics fell to Golden State in the NBA Finals, but Jayson Tatum hasn't forgotten how the Warriors celebrated on the TD Garden floor.
Despite the subject still remaining in the back of the All-Star's mind, he was asked Monday how important was beating the Philadelphia 76ers in their season opener and if it would be considered a statement, based on how the 2021-22 campaign ended for them.

"It's not a statement," Tatum told reporters in his post-practice presser. "Obviously, we want to win every game we play. But we're not going to overreact if we win, if we lose. We can learn from both. It's only one game.

"Yeah, we lost. There's no secret. We talk about it like every day. It's a relief to get out there and just play basketball and have a goal in mind. Obviously we're trying to get to a championship. It starts with tomorrow, one game at a time."

Tatum, who didn't have the best of preseasons -- especially when it came to his offensive struggles -- was also ejected from the Celtics' 137-134 exhibition loss to the Toronto Raptors over the weekend following his best outing of 21 points, nine rebounds and five assists prior to picking up his second technical foul, hadn't addressed it until days later

"That was the first time I've been thrown out of any sporting event. The part that I was bothered by was that it was a pre-season game in Montreal and they don't have an NBA team. There were a lot of Celtics jerseys, and a lot of guys that had number 0 on, they came to see me play and you don't know the next time they will have that opportunity – that was the most unfortunate part. It was pre-season though, so I didn't get fined any money…I learned my lesson," Tatum said of the ejection on Monday afternoon.

In amidst the Celtics entering training camp with a new interim head coach in Joe Mazulla, plus the injuries to Robert Williams (knee surgery) and Danilo Gallinari (torn ACL), Tatum noted how excited he is for the upcoming season while also praising his teammates.

In a recent interview with Sports Illustrated's Chris Mannix, Tatum expressed how he was "exhausted" after the Finals loss -- calling it "fucking miserable" while also stating he "didn't feel like talking to anybody" in the weeks that followed.
Still, several months removed, Tatum understands that whether the Celtics go out and win a championship this season or not, it will rest heavily on his shoulders. This current roster has a good shot to not repeat the type of start the team went through a year ago and rectify their overall failures.

"I think I have more experience, learning from that deep playoff run going to the Finals," Tatum said. "That's the benefit of that. I feel like our approach -- coming into this year differently than I did last season.
"I feel good. I think we had a really successful training camp. Obviously, we wish we had [Danilo Gallinari] and [Robert Williams] but the group that we've had, I've loved the way we've played our preseason games and I've loved the way we've practiced. I think everyone is jelling well together. The feel that we have out there, it feels good."

The Celtics quest to hang banner 18 begins tonight when they host the 76ers in the NBA's season opener. TNT has the tip-off at 7:30 PM ET.
Joel Pavón
Follow @Joe1_CSP