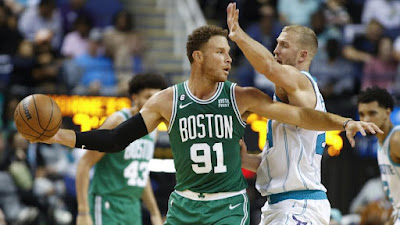 There are many takeaways from the Celtics comeback 112-103 preseason win over the Charlotte Hornets Friday night on the road.
Aside from a Boston rally -- down by as many as 16 points -- latest roster addition Blake Griffin made his C's debut after missing the previous two exhibition games.
The veteran forward, who despite going 1-of-6 from the field, finished with seven points (including a 3-pointer on a behind the back pass from Jaylen Brown), nine rebounds and two assists in 16 minutes off the bench. Griffin was also a plus-8 and a perfect 4-of-4 from the free throw line.

"It felt all right, a little rust. I hadn't played 5-on-5 yet so it's always a little weird coming in a little late," Griffin told Abby Chin of NBC Sports Boston postgame game. "But these guys are great, the coaching staff is great and I was glad we picked it up in the second half and got a win."

Griffin displayed some solid interior defense and seemed very comfortable with his new teammates, who he says are "locked in," while calling it "refreshing" at the same time.

"I think the intensity level and maturity level of this group is off the charts," he said. "Every day when we get to work, it's intense. It's not that we're going forever, but these guys are locked in and nobody has to tell us to be locked in. It's refreshing."

Celtics interim coach was pleased with what he saw out of Griffin in his first minutes of live game action, considering him joining the team officially last Monday and only participated in two practices.

"I think he'll be good for our offense, just his ability to screen and move the ball," Mazzulla said. "I thought he helped us on the glass. We're able to put him in some good positions defensively, which will help our lineup."

Griffin took full advantage of his playing time, as the Celtics were without Jayson Tatum, Marcus Smart, Al Horford and Malcolm Brogdon -- all out due to rest against the Hornets.
Boston, at 2-1, will head to up north this Friday to face the Toronto Raptors one more time in their preseason finale.
Joel Pavón
Follow @Joe1_CSP