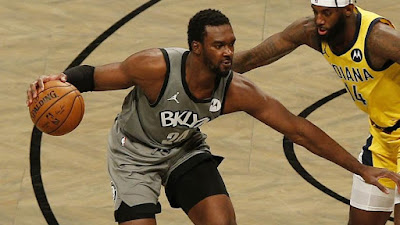 The Celtics have reportedly added big man Noah Vonleh to their training camp roster, according to ESPN's Adrian Wojnarowski.
Vonleh, who is a native of Haverhill, MA, was the No. 9 pick for the Charlotte Hornets in the 2014 NBA Draft, before being dealt to the Portland Trail Blazers as part of the trade for Nicolas Batum after his first 25 games during his rookie campaign. After spending three years in Portland, Vonleh has bounced around, as he played for five teams during the next three seasons.
The 6-foot-10 center last played in the NBA (2020-21) for the Brooklyn Nets, before taking his talents to China, where he spent the 2021-22 season playing for the Shaghai Sharks -- averaging 14.4 points and 8.0 rebounds per contest, while hitting 38.8% from 3-point range.
Vonleh has an NBA career average of 4.9 points, 5.1 rebounds on 45.9% shooting from the field in 339 games played.
At just the age of 26, Vonleh joins fellow 2014 draft class big Bruno Caboclo, who was also signed by the Celtics Monday morning -- for a chance to make the main roster following the re-signing of Luke Kornet (the third big behind Grant Williams) last month.
Boston now has four remaining training camp slots open to complete their 20-man offseason roster.
Joel Pavón
Follow @Joe1_CSP