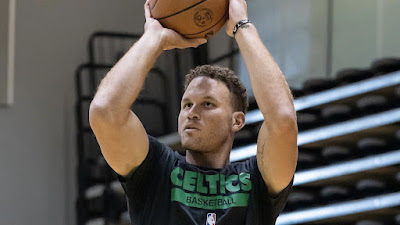 The Celtics have officially announced the signing of Blake Griffin, after he joined the team at training camp Monday morning.
Griffin reportedly agreed to a one-year, fully guaranteed contract, though the Celtics didn't disclose the terms of the deal, it's likely for the league veteran minimum of roughly $2.9 million.
When asked what kind of role he expects to have with the Celtics this season, Griffin says he can provide some frontcourt presence off the bench to help the team in their quest towards an NBA title.

"Just some stability off the bench. They obviously have centers and Rob [Williams] and Al [Horford] that have played big minutes and obviously Al being in the league for 40 years now," said a joking Griffin following practice. "Just some stability, whatever they need. If Al needs a break, if Rob needs a break, total utility. I didn't come here demanding a certain type of role. It's just to fill the gaps and help this team win a championship."

At 33-years-old and entering his 14th NBA season, Griffin is no longer in his prime but he's more than willing to accept any role asked of him in order to win at this stage of his career. Talks began with Celtics president of basketball operations Brad Stevens -- a relationship that Griffin says has grown over the last few years -- not long after it was revealed that Robert Williams would miss 8-12 weeks following a recent arthroscopic knee procedure.
Even Luke Kornet, who was set to have a bigger role to start the season, reportedly sprained his left ankle on the same day that news broke of Griffin and the Celtics coming to an agreement on a deal.

"Boston has always been one of those places as an NBA player where I feel like guys have a pretty cool experience playing there," Griffin said. "Beyond that, just the core they have, having Brad in the front office now, the coaches that they have -- I actually played against Joe [Mazzulla] in college -- this young core and the foundation they laid last year sets the table.

"This is the kind of opportunity you couldn't pass [up]."

Griffin played the last year in a half with the Brooklyn Nets and he's coming off averages of 6.4 points and 4.6 rebounds in 56 (24 starts) games during the 2021-22 campaign. Once he became a free agent and the opportunity presented itself to sign with Boston, he already knew what to expect, especially since he's been pretty familiar with the Celtics over the past two seasons, including meeting in back-to-back first-round playoff series.

"They took a big step as far as maturation [last year] and how seriously they took the game," Griffin said. "Not that they didn't before but to be a really good team, you have to take some big steps and they took those steps. It didn't seem like they cared how they got it done, they just got it done. They were willing to outplay you, out-hustle you, and when a team with this much talent has that mentality, that's really tough."

Last season, Griffin led the league in charges taken (26) -- a category that also had Derrick White (25) and Marcus Smart (16) ranked in the top-10.
With Robert Williams and of course Danilo Gallinari (ACL tear) sidelined for the time being, Smart is a fan of the move to add Griffin and boost the Celtics frontcourt depth.

"Love it," Smart said in his Saturday post-practice presser. "He's not above the rim anymore, but he still does great things. He's a great professional. Last year he led the league in charges taken. For a guy that doesn't play as much, that speaks volumes of what he does. He can affect the game not just with offense, but defensively. So it'll be a great pick up for us. It's a great vet for some of these young guys to listen to and what he has to offer."

While interim head coach Joe Mazzulla says he was not involved in the Celtics discussions regarding Griffin, but he did have high praise for the six-time All-Star, calling his versatility on both ends of the floor as a big vital -- especially when it comes to movement of the ball.

"He's got great experience, played alongside great players, great coaches," Mazzulla said Monday during his post-practice press conference. "Great basketball mind. He's a big body for us that can help us do things on both ends of the floor."

Griffin, who will wear No. 91, didn't play (signing was not official yet) in the Celtics' 134-93 blowout win over the Charlotte Hornets -- the C's first preseason game -- but early introduction to the team over the weekend has made him feel very much embraced so far.

"I'm actually very … not surprised, but the amount of maturity and like (welcoming the C's are), it's a different atmosphere than I was sort of used to, in a good way," Griffin explained. "They're very welcoming and everybody, 1 through 15 or however many guys are here, in practice was focused, very encouraging, helpful and you kind of take that for granted because it's not always the case everywhere you go."