Jayson Tatum is not concerned about preseason struggles, says 'I start off slow' 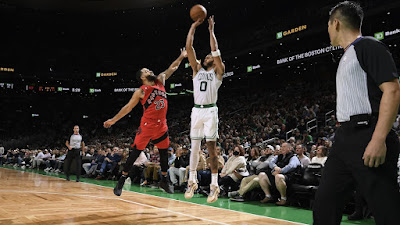 The Celtics are 1-1 in preseason play following their 125-119 overtime loss to the Toronto Raptors Wednesday night at TD Garden.
With the starters holding down a 19-point advantage, it was the C's deep bench players that gave up the lead -- as they were outscored 54-29 in the fourth quarter and the extra five-minute session.
While Boston's rotation players appear to be in midseason form for the most part, All-NBA star Jayson Tatum seems to be struggling offensively so far, despite notching a 18-point, 10-rebound double-double against the Raptors -- going 0-of-7 from deep and 6-of-16 from the field -- overall he's shooting is 10-of-27 (37%), which includes 2-of-15 (13.3%) from long distance in his first two exhibition games.
Tatum says he's not concerned about his slow start, noting that's always the case at the start of the season, but eventually he gets going as the year goes on.

"This is what I do. I start off slow, you know what I'm saying? But no, I ain't worried. It's preseason; don't put too much stock into it," said Tatum in his postgame presser. "We've had many talks like this. I know what I can do. I know that I can shoot. I'm not worried. I still impact the game. One day I might make 10 3's, and then we'll forget about it."

The Celtics forward seems to be enjoying training camp with his teammates even amidst of some early hiccups.

"I'm just happy to be playing. It's fun the way we're moving the ball, everybody's touching it, impacting the game. It's just been fun these last two games."

Tatum, who played about 29 minutes against the Raptors, could be seen laughing with new teammate Blake Griffin and fellow All-Star Jaylen Brown on the bench, as team chemistry is clearly not an issue on this roster thus far.
The Celtics will play game three of the preseason on the road against the Charlotte Hornets tonight, before having six days off to practice and head to Canada for their finale vs. the Raptors next Friday.
Joel Pavón
Follow @Joe1_CSP