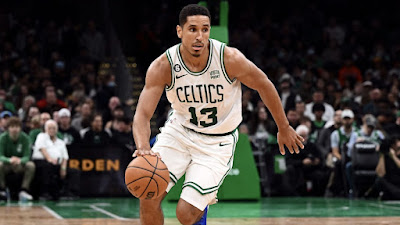 Malcolm Brogdon was giving an opportunity to pick his trade destination by the Indiana Pacers this past offseason.
According to the veteran guard, he had a choice of either the Boston Celtics or the Toronto Raptors before ultimately going with the latter of the two options. In a interview this week on Sirius XM NBA radio, Brogdon shared how the deal with the C's went down and why he opt for them over heading up north of the border.

"At the end of the day, we knew there was Boston, we knew Toronto, and we knew [Washington]," Brogdon said. "D.C. fell off after the draft since they were thinking about trading that 10th pick for me. Toronto and Boston popped up. We had a choice to pursue -- there wasn't an offer on the table yet from either of them but the Pacers came to me and said we could pursue either of them and which one would I rather pursue? I choose Boston."

Once Brogdon informed the Pacers his top option was the Celtics, the ball got rolling and the trade was done rather quickly. The two teams agreed to a swap on July 1, the first full day of the NBA offseason. Boston sent Daniel Theis, Aaron Nesmith, Nik Stauskus, Malik Fitts, Juwan Morgan, and a 2023 first-round pick to Indiana in exchange for Brogdon.
For a team being two wins shy of an NBA title, Brogdon thought his preferred destination in choosing the Celtics over the Raptors was a no brainer.

"I thought this team was further along," Brogdon said. "They have a superstar in Jayson Tatum and probably another superstar in Jaylen Brown as well. I thought it would be a great fit for me because I wanted to win right now."

While Brogdon's role as a sixth-man was agreed upon prior to his arrival, he's already played minutes with the starters in the preseason, while also leading the team with 18 assists in just two exhibition games so far. Still, the 29-year-old has not only embraced his role with his new teammates but Brogdon also wants them to know that he's willing to do whatever it takes to win.

"It was really important to me because I wanted to send a message to the guys on this team that, regardless of what I was doing in Indiana, I'm willing to sacrifice to win to be a part of what you guys got going. It's not about me, it's about the team," Brogdon said during another interview with NBC Sports Boston. "So I wanted guys to know that, openly and upfront, that I'm in it for the team, even if I play a smaller role here than I did wherever else I was."

The Celtics ironically are in Montreal, Canada tonight to face the Raptors once again in their preseason finale.
Joel Pavón
Follow @Joe1_CSP