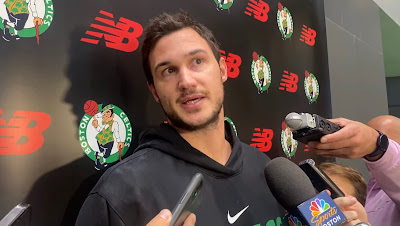 Danilo Gallinari immediately knew something was wrong when he sustained a non-contact injury to his left knee back in August.
The Celtics forward was playing for the Italian national team in a FIBA World Cup qualifier when the initial diagnosis was a torn meniscus, but Gallinari wasn't so sure. Not too long after, it was deemed a torn ACL in the same knee that he had surgically repaired back in 2012-13, contradicting the original analysis.

"The way that I got injured was very similar to the way I got injured the first time I did my ACL," Gallinari told reporters on Tuesday. "So yeah, my feelings were that something big [was] happening in my knee. Unfortunately, I was right."

Gallinari underwent successful surgery last month, as he spoke to the media for the first time since his torn ACL diagnosis, while admitting that the injury has been "tough, mentally" as a 34-year old veteran -- who's going through this process for the second time in his career.

"The good and the bad thing is that I've been through this already, so I know what to expect," Gallinari said. "But it's always tough, especially when you approach a situation like this, coming to play for the Celtics, ready to help the team winning. It's tough, but nothing I can do about it. We're here and now we've got to focus on the rehab."

This upcoming 2022-23 campaign was supposed to be an opportunity to not only play for the team Gallinari cheered for during his childhood, but also help compete for a championship by adding to a Celtics bench that lacked depth in their NBA Finals four months ago. Instead, the 14-year veteran has just begun walking for the first time since his ACL procedure. but Gallinari isn't ruling out a return this season just yet.

"Small things," Gallinari said. "When you're doing exercise, you can do more reps the next day or you can do reps better the next day. The PTs, they add a couple of exercises every day so that's a great thing that happened every single day. So, small things are big things in the rehab process."

Gallinari also added: "I'm just taking it day by day. That's the best way to approach a rehab and approach an injury like this, to take it day by day and not really think about what's going to happen in the future. So that's the approach that I have."

Despite no timetable being set yet on how long the recovery will take -- typically ACL tears are anywhere between six months to a year -- Gallinari isn't ruling out a return this season just yet.

"I can say that you have to be very strong mentally to be able to keep doing what I've been doing for so many years," Gallinari said. "That's maybe the best part of my game and myself is the mental toughness, so mentally you gotta be very strong, especially when this happened to you already and if you do it again, even tougher. But like I said, it happened to me but I came back stronger and better. I'm still here and I'm going to come back, even if I'm not that young anymore, but I'm going to come back stronger and better again."

Still, whether Gallinari is able to make a return this season or not, the Celtics forward likes what he has seen thus far with the team's second unit led by newcomer Malcolm Brogdon and young sharpshooter Sam Hauser. Either way, he believes there something great brewing overall with this current C's roster.

"I think practices have been great and you can see the mental approach to the team and every day working great," Gallinari said. "That's the difference between great teams and average teams, and I think that this is a great team."

The Celtics will face the Toronto Raptors on the road Friday night in their preseason finale, before hosting the Philadelphia 76ers at TD Garden next Tuesday to open up the 2022-23 regular season.
Joel Pavón
Follow @Joe1_CSP