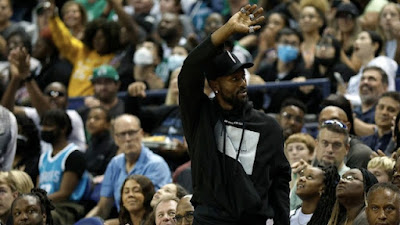 Old friend Kemba Walker was in attendance Friday night to take in the Celtics 112-103 preseason win over the Charlotte Hornets.
The veteran guard still has connections with both ball clubs, as his NBA career hangs in the balance following a down 2021-22 campaign with the New York Knicks and being traded to the Detroit Pistons this offseason, where he's expected to be bought out at some point.
Walker played under Brad Stevens between 2019-21 when now Celtics head coach Joe Mazzulla was an assistant. The former C's All-Star spoke with NBC Sports Boston's Abby Chin about the man and coach that has replaced the suspended Ime Udoka for the upcoming season.

"He was my personal coach during my time with the Celtics," Walker said Mazzulla Friday night. "He's hard-nosed. He tells it like it is. He has great character. He holds everyone accountable equally. He's just not scared, you know? He's not scared.

"And I know everybody was talking trash about him and stuff because they didn't know who he was, but they've got a great coach. But even more importantly, just a special person. He's a special guy to me. So yeah, I've got a lot of love for that guy."

While the 32-year-old says he hasn't gotten a phone call from any teams with less than a week before the 2022-23 season is set to begin, Walker is adamant he's not ready to call it a career just yet.

"As far as closing my career, I've got a few more years left in my opinion, so I'm not thinking about that yet," Walker told Boston Globe's Gary Washburn. "We'll see. I'm just waiting. [Nobody's] reached out to me. I'm just waiting."

Walker's resume speaks for itself, as he's a four-time All-Star and the Hornets franchise's all-time leading scorer. However, a nagging knee injury led the Celtics to trade him after two tumultuous seasons in Boston for Al Horford in the summer of 2021.

"It's never been basketball [performance]. It's just been my knee," Walker said. "I don't have anything to prove. Everybody knows what I'm about over the years, what I have done in this league."

After being waived by the Oklahoma City Thunder, Walker joined his favorite childhood team when he returned home to play for the New York Knicks this past season, but appeared in just 37 games, averaging 11.6 points and 3.5 assists before head coach Tom Thibodeau benched him for good and was traded to the Pistons in a salary dump three months ago.
Still, a discussion has been had about a possible return to Charlotte, while Walker also added "that would be special" on a potential reunion with the franchise he spent the first eight years of his career with out of UConn, despite the Hornets already signing LaMelo Ball's backup in 24-year-old Dennis Smith Jr. -- who is playing for his fifth team over the past four seasons.

Though Walker has been a proven leader and locker room presence throughout his career, a lingering knee injury and being on the wrong side of 30, may not land him on a contending roster like the Celtics any time soon.