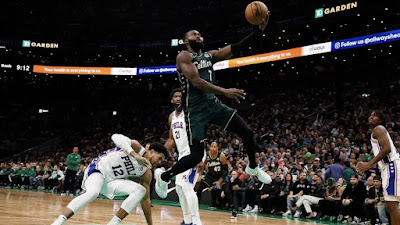 The Celtics tipped-off the 2022-23 NBA season with a 126-117 win over the Philadelphia 76ers at TD Garden Tuesday.
On a night that began with a pregame tribute to the late basketball and social justice icon Bill Russell, it was Jayson Tatum, who shot 13-of-20 from the field to finish with 35 points to go along with 12 rebounds and Jaylen Brown also netting 35 points on 14-of-24 from the floor -- to lead the C's to victory in their home opener.

Malcolm Brogdon had 16 points in his debut off the bench, while Grant Williams added 15 points and Marcus Smart chipped in 14 points, seven assists for Boston.
The Celtics -- who wore their Russell inspired City Edition uniforms for the first time -- shot lights out, hitting 56.1% of their attempts and dominated Philly in fast break points 24-2, while only turning the ball over 10 times and forcing the 76ers to commit 14 turnovers.

"We did a great job maintaining our poise," said Joe Mazzulla, who earned his first win as an NBA head coach. "We put ourselves in some difficult situations with some of the fouls. Some stuff didn't go our way, but we didn't overreact. We maintained our focus and execution."

James Harden was 9-of-14 from the field, including 5-of-9 from deep to lead the Sixers with 35 points, eight rebounds and seven assists. Joel Embiid notched a 26-point, 15-rebound double-double, with Tyrese Maxey adding 21 points and Tobias Harris also recording 18 points in the loss.
The Celtics got off to a 9-2 start, before Philadelphia responded with a 12-2 run of their own -- taking full advantage of Al Horford and Noah Vonleh each picking up two fouls a piece, putting the 76ers in the bonus early within the first 12 minutes and outscoring Boston 27-15 overall.
It was all tied up 63-63 at the break prior to the Embiid and Smart getting tangled up to start the third quarter -- leading to a foul and a tech on the C's point guard. Tatum went on to score 17 of the team's 35 points in the period, giving the Celtics a 98-88 advantage heading into the final frame.
Jaylen Brown took over the fourth doing most of his damage while Tatum sat for nearly six minutes to begin the quarter. The wing scored 13 points while hitting 3-of-4 from behind the arc, including a dagger 3 in the final 1:26 left to play, giving Boston a 126-110 lead -- the largest of the night.

"Just being able to have the freedom to make plays," Brown said. "Our system is catered to what we do best."

The Celtics are off until Friday night when they travel to Florida and face the Miami Heat and Orlando Magic in their first back-to-back of the season, before heading to Chicago Monday to take on the Bulls.