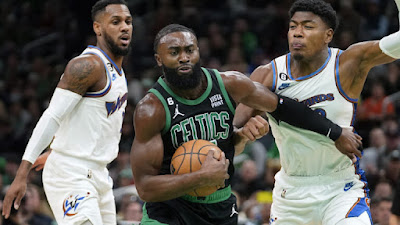 The Celtics played probably their most complete game of the young season, as they beat the Washington Wizards 112-94 Sunday night at TD Garden.
Jaylen Brown recorded his first double-double of the 2022-23 campaign with 24 points on 7-of-18 from the field (4-of-9 from 3-point territory) and 10 rebounds. Jayson Tatum scored 23 points on 8-of-15 from the floor, including 5-of-10 from deep to help Boston snap a two-game skid and improve to a 4-2 record.
Malcolm Brogdon added 23 points off the bench and Grant Williams returned following a one-game league suspension dressed as Batman to chip in 10 points in the win.
The C's hit 21 three-pointers on 47 attempts, while holding the Wizards to 38.8% overall shooting and 21.9% from behind the arc.

"I love 3-pointers, I like math," said Celtics interim Joe Mazzulla. "I think it's a huge strength of our team. The thing we have to learn on the offensive end...is making sure we're getting the best, accurate shot every time down and regardless if it goes in or not, it's a good shot. We did a good job of when shots were not falling of competing defensively."

Kristaps Porzingis finished with 17 points, 13 rebounds and Rui Hachimura had 13 points to lead Washington. Bradley Beal, who went scoreless on his first 11 shot attempts, netted 12 points on 4-of-16 from the field (2-of-7 from 3) and dished out eight assists for the 3-3 Wizards.
The Celtics opened the game on a 11-2 run on their way to outscoring the Wizards 34-15 entering the second period, before taking a 58-47 advantage into the break.
Beal's first points came with 2:29 left in the third on a pair of free throws, as Boston never trailed in this one, jumping ahead by as many 25 points.
The Celtics were able to hold onto a double-digit lead in the second half against Washington, as they failed to do so in their previous two losses against the Chicago Bulls and Cleveland Cavaliers.

"The sole focus is we want to have hot starts like that -- offensively and defensively," Marcus Smart said in his postgame presser. "Sustaining it is our problem. We wanted to come out tonight and make a big emphasis on that end. Once we get that lead because of our defense...not to let it slow down and take our foot off the gas pedal."

After giving up an average of 126 points against the Bulls and Cavs, Boston held the Wizards to only 94 points in an impressive wire-to-wire victory at home.
The Celtics will head to Cleveland Wednesday night to face the Cavaliers in a rematch of last week's 132-120 overtime loss. Tip-off is at 7:30 PM ET on ESPN.