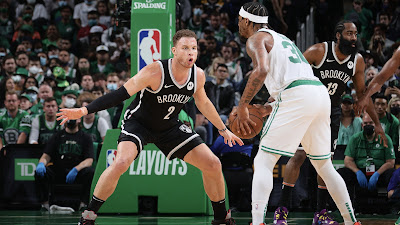 The Celtics have agreed to a one-year, fully guaranteed contract with Blake Griffin, according to ESPN's Adrian Wojnarowski.
The 6-foot-10 forward will provide Boston with some frontcourt depth after Danilo Gallinari tore his left ACL last month and starting center Robert Williams III had arthroscopic surgery on his left knee that could keep him sidelined for about 8-12 weeks.

The Celtics have agreed to a one-year deal with Blake Griffin, a league source confirms. Per source, Cs attended Griffin's recent workouts in Los Angeles and saw enough. It's a vet min deal.

With Griffin, the Celtics now have 12 standard contracts on their roster, as the 33-year-old veteran has played 12 seasons for the Los Angeles Clippers, Detroit Pistons and the past season and a half with the Brooklyn Nets.
The six-time All-Star and former five-time All-NBA forward averaged 6.4 points and 4.6 rebounds in 56 games (24 starts) during the 2021-22 campaign.
The Celtics have entered training camp with centers Luke Kornet and Mfiondu Kabengele (two-way) battling for playing time, along with frontcourt preseason invitees Noah Vonleh, Jake Layman and Luka Šamanić who could potentially fill open roster spots as well.
Boston will host the Charlotte Hornets Sunday afternoon at TD Garden in their first of four exhibition games, before their regular season opener against the Philadelphia 76ers on October 18.
Joel Pavón
Follow @Joe1_CSP