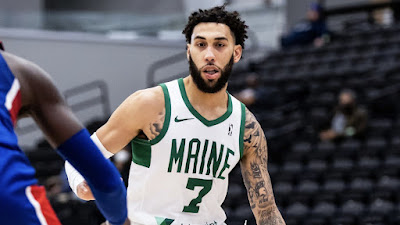 The Celtics will reportedly waive guard Denzel Valentine, according to The Athletic's Shams Charania.
After reports that the team had agreed to sign veteran forward Blake Griffin Friday morning, Boston had to release a player to make room on their 20-man training camp roster, which reached its max following the signing of Brodric Thomas late last week.
Valentine, who signed an Exhibit 10 deal in August, is eligible for a bonus worth up to $500,000 if he spends at least 60 days with the Maine Celtics, Boston's G League affiliate -- assuming another NBA team doesn't scoop him up in the meantime.
The 6-foot-5 wing played 12 games for the Maine Celtics last season with averages of 14.6 points on 44% shooting from the field, 35.2% from 3-point territory, 10.3 rebounds and 7.0 assists in 31.9 minutes per contest -- before spending the better part of the 2021-22 campaign with the Cleveland Cavaliers, New York Knicks and Utah Jazz.
The No. 14 overall pick in the 2016 NBA Draft, Valentine spent the first five years in the pros with the Chicago Bulls, including the 2018-19 season where he sat out with an ankle injury. In 256 career NBA games (45 starts), Valentine has averages of 7.0 points, 3.4 rebounds and 1.8 assists, while shooting 39.4% from the field and 36% from behind the arc.
Joel Pavón
Follow @Joe1_CSP