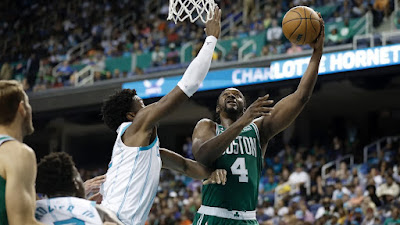 The Celtics roster is officially set, as the 2022-23 regular season will tip-off Tuesday night at TD Garden.
Injuries to center Robert Williams and veteran forward Danilo Gallinari led to the team making some unforeseen decisions to keep training camp invites Noah Vonleh and Justin Jackson to round out the final 17-man roster.
Vonleh, a native of Haverhill, Massachusetts, is excited to not only play for his hometown team, but grateful for the opportunity of making an NBA return following an 18-month stint playing overseas in China.

"I was very excited, especially when they reached out to my agent about the idea of bringing me in early August," Vonleh said Sunday in his postgame presser. "I was very excited. I looked at the roster, I looked at the guys that were coming in, and I felt like I had a great chance and a great opportunity, and they also told me that I had a great opportunity. So, I'm just happy. Yesterday, finalized it, and I'm officially on the roster."

At 27-year-old, Vonleh has seven years of NBA experience with seven different teams and now Boston will be his eighth. Despite making the opening night roster, the 6-foot-10 journeyman isn't content with simply being at the end of the Celtics bench, he's looking to find a consistent role to stick around.

"But still gotta make it to the trigger date, January 7, so I gotta stay locked in and keep taking it day-by-day from here on out and even beyond that," said Vonleh.

Vonleh's initial Exhibit-10 contract will now be converted into a non-guaranteed deal and if he's not waived before January 7, 2023 -- it then becomes fully-guaranteed -- which is what the big man is shooting for.
With Robert Williams out for the first 2-3 months and preserving a 36-year-old Al Horford through an 82-game season and most likely a long-playoff run, Vonleh will have that chance of boosting the Celtics' frontcourt depth with the likes of Grant Williams, Blake Griffin and Luke Kornet.
During the preseason Vonleh displayed consistency with his rebounding and ability to finish at the rim in all four games played -- including his 14-point, 13-rebound performance as a starter against the Charlotte Hornets over a week ago.

"Just coming in, doing my work, screening, getting guys open, playing with a lot of energy, playing high energy," Vonleh said. "And rolling, putting a lot of pressure on the rim, and just rebounding. I feel like I can be one of the best rebounders on the team, so I just gotta be on that glass."

Vonleh led the team in rebounds through four exhibition games with 7.25 boards per-contest, an area that the Celtics looked vulnerable in their preseason finale against the Toronto Raptors. While defense remains a top priority this year, Vonleh expressed how his teammates are motivated in the push towards their goal of winning an NBA championship.

"I feel like everybody is still locked in," said Vonleh. "I wasn't here last year, but just watching the whole process, seeing how they made it all the way to the Finals and came up a couple games short. I mean, guys are motivated, everybody's talking about starting off the season on a good note. So, we just gotta keep coming in and working hard. A very mature group."

As for Jackson, who had an up-and-down preseason, but was very impressive during Las Vegas Summer League, he was happy to grab the Celtics' final roster spot.

"It's a blessing for sure," said Jackson on Sunday during his press conference. "Definitely looking forward coming to an already great team, an already great historical organization, and just learning as much I can and contributing in whatever ways I can possibly contribute."

The Celtics open up the 2022-23 campaign Tuesday when they host the Philadelphia 76ers, as tip-off is at 7:30 PM ET on TNT.
Joel Pavón
Follow @Joe1_CSP