Malcolm Brogdon on adjusting to Celtics: 'I haven't played on a team like this' 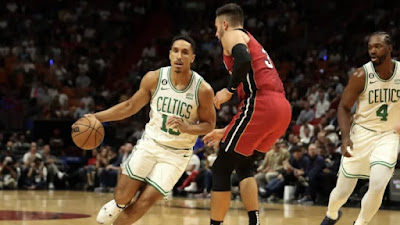 The Celtics are 2-0 this season following a 111-104 win over the Miami Heat on the road Friday night and Malcolm Brogdon is impressed so far with his new teammates.
The veteran guard had high praise for a roster he definitely considers a championship contender and one that he's never been on before during his six-year career.

"I haven't played on a team like this where one through five, everybody that's on the floor takes pride in the defensive end. It's a championship characteristic for sure," Brogdon said during his postgame presser.

While he's had to adapt to his sixth-man role, Brogdon admits that it's been an adjustment playing the Celtics' defensive schemes and switches as well -- which to him is also a first.

Though it's only been two games, Brogdon has shown that he's been a great addition to a Celtics team looking to not only getting back to the NBA Finals, but to actually winning it all.
Despite having an off night against the Heat (seven points on 2-of-9 shooting, five rebounds and three assists), Brogdon finished with a plus/minus of plus-seven.
In the season opener against the Philadelphia 76ers, Brogdon put up 16 points on 7-of-11 from the field and four assists (plus-nine) for his Celtics debut. It's evident that Boston is a much better team when Brogdon is on the floor so far, something the C's are willing to bank on, hopefully through June.
In the meantime, the Celtics will continue their road trip against the Orlando Magic tonight in their first back-to-back of the season, before heading to Chicago to take on the Bulls Monday.
Joel Pavón
Follow @Joe1_CSP