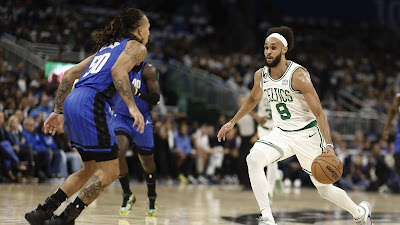 The Celtics beat the Orlando Magic 126-120 Saturday night at Amway Center for their third straight win.
Coming off an impressive, 111-104 victory over the Miami Heat Friday, while playing in their first back-to-back of the season without Al Horford (lower back stiffness) -- the Celtics improved to 3-0 behind Jayson Tatum's 40-point performance to lead all scorers.
The All-Star forward was 14-of-21 from the field, including 4-of-10 from deep to go along with eight rebounds, while Derrick White finished with 27 points (10-of-17 from the floor) -- his most as a Celtic.
Stepping up when his team needed him offensively, White's efforts emphasized the importance of having a deep roster -- a group filled with players that can make a huge impact at a moment's notice.

"That's what I love about our team on any given night. Different number of guys will be called upon to step up and help us win a game," said Tatum in his postgame presser, praising White's impact.

Despite Jaylen Brown's scoring struggles (12 points on 4-of-16 shooting and nine rebounds), the C's got plenty of help from their second unit with 39 bench points -- led by Grant Williams (six rebounds) and Malcolm Brogdon, who each chipped in 13 respectively.
Terrence Ross came in hot, scoring a team-high 29 points (11-of-19 and 5-of-8 from behind the arc) for the Magic. Rookie Paolo Banchero bounced back after a 1-of-5 start, finishing with 23 points, five rebounds, and three assists. Franz Wagner also added 18 points and six boards for Orlando, who are now 0-3 to start the season.
Boston's top-ranked offense continued to build off their hot start in the first quarter, as their stars of Tatum and Brown were averaging a combined 63.5 points in two games entering the night. But the dynamic duo had vastly different starts against Orlando, with Brown struggling from the field in the first-half, shooting 1-for-9, while Tatum's 15 points in the first period alone helped jump-start the C's offense.
The Magic got off to a strong start, with a 9-2 run, but that lead quickly vanished when Tatum scored seven unanswered points in the first four-minutes of the game. Terrance Ross scored eight points to start the first, as Boston's defense struggled to keep the Magic's offense in check, but their offense started clicking behind their 3-point shooting -- hitting eight of their first 15 attempts from beyond the arc, the Celtics shot confidently early on keeping up with Orlando's balanced scoring attack.
With a 36-33 lead to start the second quarter, the Celtics behind Sam Hauser (3-of-4) and White (4-of-4) continued to knock down 3-pointers, despite getting outscored in the paint 20-10. Boston set a franchise record for the most made 3s in a half with 14-of-27 attempts.
White, who was inconsistent from deep last season, made an emphasis during the off-season to work on his confidence -- which was on full display in his 5-of-9 3-point effort.

"I've been feeling comfortable this whole training camp and the whole preseason, the first couple games. I think a big thing this summer was confidence for me," said White in his postgame media press conference.

Following a 68-68 tie at the break, Tatum picked up where he left off in the first half, scoring nine points in less than three minutes into the third, including an acrobatic left handed layup for an and-1 to give the Celtics a 73-71 advantage and his 30th point of the night. Ross matched Tatum with nine points of his own in the period, as Orlando trailed 99-94 heading into the final frame.
With 4:47 left to play, Tatum made a go-ahead 12-footer to put  Boston ahead 111-109 and they never trailed the rest of the way, even when the Magic made one last rally attempt -- converting on their 12th offensive rebound (22 points on the night) just over a minute later.
In the final two minutes, White made a series of winning plays that contributed to holding off a young Orlando team. While cutting to the basket, White finished a tough two-hand dunk off a beautiful pass from Tatum spinning around defenders to put the Celtics up 116-111, following a made free-throw.
On the very next play, White drew a charge on a driving Cole Anthony (14 points, nine rebounds) to re-gain the ball. On Boston's next possession, Tatum hit a crucial side-step dagger 3-pointer to push the C's lead 121-113 with 1:21 remaining.
However, the Magic fought to very end, using another 7-3 spurt to get within four, but Tatum hit two clutch free throws to reach the 40-point mark and put an unexperienced Orlando team away.
Although the Celtics remain undefeated, Tatum wasn't satisfied with how his team played, especially defensively, knowing their ultimate goal.

"We gotta be better. 120 points, 100 plus points in the first game, that's just not who we are. I mean it's a back-to-back, it's early but if we're trying to get back to where we want to be, we gotta play way better than this. It shouldn't take the back and forth for us to play the right way on both ends," said Tatum in a postgame interview with NBC Sports Boston's Abby Chinn.

Tatum has improved his scoring total to 34.6 points per contest on the season, with many putting the 24-year-old in the MVP conversation already. Still, Tatum seems more focused on getting back to the NBA Finals and winning a championship, even though he's acknowledged winning an MVP has always been a goal of his. But following a challenging summer, Tatum is motivated to achieve yet a bigger goal -- becoming an NBA champion.

"I've said it a million times, I'll say it a million more times. All I'm concerned about is getting back to the championship and getting over that hump," said Tatum to reporters.

The Celtics will have one day off until they return to action and wrap-up their road trip against the Chicago Bulls on Monday night. Tip-off begins at 8:00 PM ET.