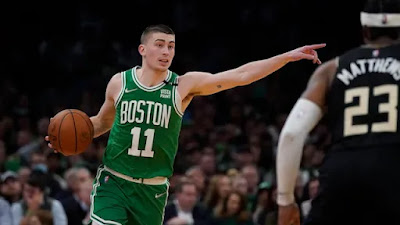 The Celtics have reportedly picked up Payton Pritchard's fourth year team option for the 2023-24 season, according to Adam Himmelsbach of the Boston Globe.
Boston will retain the point guard's rights, meaning Pritchard won't become a free agent next summer.

According to a league source, the Celtics have picked up Payton Pritchard's 2023-24 team option.


Though Pritchard hasn't played much to start the season with the addition of Malcolm Brogdon, the 24-year-old will get his opportunities as the 2022-23 campaign goes on, especially if injuries occur.
Pritchard has developed into somewhat of a sharpshooter off the bench for the Celtics and after a shaky start the 2021-22 season, the veteran earned more playing time once Dennis Schröder was traded to the Houston Rockets at last February's deadline -- thus receiving consistent rotation minutes on a roster that was two wins away from an NBA title.
With the three-headed monster of Marcus Smart, Derrick White and Brogdon playing a bulk of the minutes at point guard for the Celtics, exercising Pritchard's fourth year team option could also mean that he may become a trade chip for any potential move down the line as well.
Pritchard is averaging 6.9 points on 43.4% shooting from the field and 41.3% from deep, to go along with 2.9 rebounds and 1.9 assists per contest in 139 games played (six starts) since being drafted by the Celtics with the 26th pick in the infamous 2020 NBA Draft -- following the conclusion of the playoffs at the Disney bubble.
Joel Pavón
Follow @Joe1_CSP