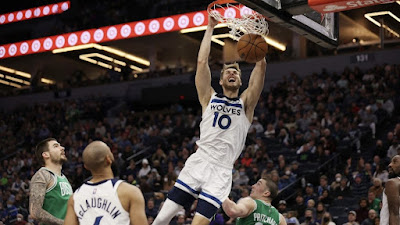 The Celtics have reportedly signed free agent forward Jake Layman to a training camp deal, according to Bobby Manning of CLNS Media.
Originally from Norwood, Massachusetts, Layman was selected with the No. 47 pick overall in the 2016 NBA Draft. He's listed at 6-foot-8 and has career averages of 4.8 points on 46% shooting and 1.7 rebounds in 243 games played over the past six seasons between the Portland Trail Blazers (2016-19) and the Minnesota Timberwolves (2019-22).
With the signings of G League guard Denzel Valentine, Summer League standout Justin Jackson (also reported to get a preseason invite -- per Manning), veteran big Bruno Caboclo and fellow MA native Noah Vonleh along with Layman -- that brings the Celtics current training camp roster to 19 out of the max of 20 allowed.
While there are only 12 players signed to regular season deals, plus a pair of Two-Way signees in JD Davison and Mfiondu Kabengele, the Celtics don't plan to bring in another forward on a standard contract to replace Danilo Gallinari following the team's diagnosis of an ACL tear last week.
However, the Celtics still have three regular season slots to fill, with a chance for those on training camp deals to make the opening night roster.
Joel Pavón
Follow @Joe1_CSP