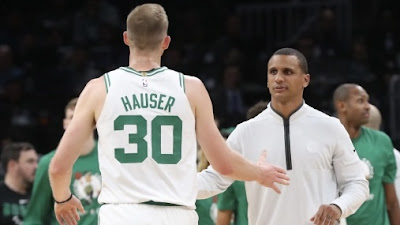 The 2022-23 Celtics got off to a great start Sunday afternoon, as they beat the Charlotte Hornets 134-93 in blowout fashion at TD Garden.
While there clearly has been one too many distractions for interim head coach Joe Mazzulla and his roster that has been caught off guard in recent weeks, the Celtics used their preseason opener to work through new additions and recent injuries, as they look to make another NBA Finals run.
Outside of Jaylen Brown's 24-point performance and Malcolm Brogdon's nine assists in an impressive win, those that also shined against the Hornets included Sam Hauser, Mfiondu Kabengele and Noah Vonleh.
For Hauser, his 14 points on 4-of-5 3-pointers in 19 minutes off the bench is exactly the type of scoring the C's need off the bench in light of veteran Danilo Gallinari being out 6-12 months with a torn ACL.

"It's only one game, but it was good to get back out there and play with these guys and get used to playing with them and off of them. Making some shots help. Good confidence booster and hopefully can keep it rolling," Hauser said following the victory.

In his rookie season, Hauser only appeared in 26 games for he Celtics, playing an average 6.1 minutes per-contest. However, in 13 appearances for the Maine Celtics of the G League, Hauser averaged 20.2 points, 6.2 rebounds, and 2.9 assists on 46.0% shooting from the field and 40.7% shooting from behind the 3-point arc.
With heading into his sophomore year in the NBA, Hauser has already noticed the difference in the pace of the game slowing down considerably compared to a season ago.

"I think the game has slowed down a little bit. I think that's natural with basketball. Everything seemed a thousand miles an hour last year. You just get used to it, so I think just trying to be more comfortable and being around these guys more have helped," he added.

Hauser clearly displayed confidence in shot against the Hornets, something that can be very useful in a Celtics lineup that lacks some depth in the frontcourt with Robert Williams (knee) and Gallinari being out for the time being.
Still, Mazzulla put trust in Hauser and it paid off as the forward seemed to be in the right spots on both ends of the floor during his limited playing time.

"Thought he played well, I thought he was in the right spot, tried to make the right play. You know, like you said, that we have a bunch of guys that have the ability to make shots and we really played well together. And so he fits right into that.," said Mazzulla during his postgame presser.

Celtics center Luke Kornet -- the latest big on team's injury report with a sprained left ankle -- has had a front row seat to Hauser's development as they both played in Maine together this past season. According to Kornet, he believes with Hauser getting more opportunities it will only help him improve to become a more experienced shooter.

"I'm really excited for Samuel David Hauser. And hopefully just to see him continue growing as a player. Coming from last year, I think he just got better, every step along the way, and I'm hoping that more opportunity kind of opens it up so that he can continue to do that," Kornet said on Monday.

As for Kabengele and even Massachusetts native Vonleh, they both took full advantage of their opportunity given against the Hornets.
Kabengele in 11 minutes on Sunday went a perfect 4-of-4 to score 10 points, while also displaying great energy on the defensive end.

"I thought he played more (minutes), because of his presence," Mazzulla said. "I think that's exactly what we’re looking for. Regardless of how much time you had, what's your presence? Where is it felt? Same thing as Noah. What's our defense like when you're on the floor and then how are you gonna help our offense? I thought his presence was great."

After a strong showing for the Celtics in Las Vegas Summer League this past July, the 6-foot-10 center earned himself a Two-Way contract. With a chance to play quality minutes on the main roster this season, Kabengele isn't wasting the opportunity to play for a storied franchise.

"At warmup, coming around, I was looking up and just saw all the banners and I was like, 'Man, it's good to be back up top because it's something you dream about," Kabengele said in his postgame press conference. "And now that I'm back, I want to stay here for a long time. So I'm definitely grateful."

Vonleh, a 2014 first-round pick from Haverill, MA, was the first center to check in off the bench Sunday behind Al Horford -- contributed seven points and nine rebounds in 13 minutes. Though he did pick up five fouls in that span, Vonleh also hit a buzzer-beating 3-pointer at the end of first quarter and played good defense.
The Celtics, who have just added Blake Griffin, will host the Toronto Raptors on Wednesday night at home in the second exhibition game of four, with tip-off being at 7:30 pm ET.
Joel Pavón
Follow @Joe1_CSP