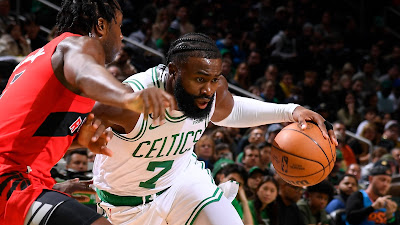 The Celtics blew a 19-point lead, as they fell to the Toronto Raptors 125-119 in overtime on Wednesday night at TD Garden.
For the second straight preseason game, Jaylen Brown led all scorers, this time netting 23 points on 9-of-14 from the field and 3-of-6 from behind the arc in 27 minutes of action. Sam Hauser once again put on a shooting clinic off the bench, scoring 22 points (5-of-8 from deep), while displaying some great chemistry with newcomer Malcolm Brogdon, who finished with nine assists for a total of 18 dimes overall in the first two exhibitions so far this week.

"Two Virginia guys. Got a little bit of a connection there." Hauser said in his postgame presser of playing with Brogdon "I know when I'm playing with him just to stay ready, because he knows where I'm at on the floor at all times. He's easy to play with, he's a playmaker and gets others open...it's fun playing with him."

Jayson Tatum notched a double-double of 18 points, 10 rebounds, while Payton Prichard added 17 points and five assists in the Celtics (1-1) first loss after beating up on the Charlotte Hornets this past Sunday.
Luke Kornet (ankle) missed his second matchup this week and veteran Blake Griffin did not dress in what would have been his Celtics debut.
Pascal Siakam, Precious Achiuwa and Josh Jackson each were the leading scorers for the Raptors, with 13 points apiece, while Khem Birch added 10 points on a perfect 4-of-4 from the floor -- as Toronto picked up their second win and are 2-0 in  preseason play.
The Celtics led by double digits for three quarters, including being ahead 62-46 at halftime and taking an 18-point lead into the final frame, before the Raptors outscored Boston 53-29 in the fourth period and overtime.
After shooting well over 55% from the field and nearly 47% (22-of-47) on triples against the Hornets, the Celtics percentage dropped to 44.4% from the floor and 30.8% (16-of-52) from behind the arc against Toronto -- despite the C's recording 30 assists (72 in two games) as a team on 44 made baskets.
Though turnovers were way down from the 25 committed on Sunday to only 10 last night for Boston, the Raptors bench outscored the Celtics' second unit 78-58, while Toronto lived around the basket -- outscoring the home team in the paint 70-52 and winning the rebound battle 70-52.
The Celtics will head to Charlotte Friday night to face the Hornets (0-2) once more in game three of the preseason, as tip-off is at 7:30 PM ET.
Joel Pavón
Follow @Joe1_CSP