Why JJ Redick has Celtics as East favorites this season 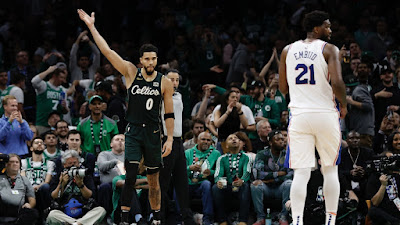 The Celtics got off to great start to their 2022-23 season with a 126-117 win over the Philadelphia 76ers Tuesday night at TD Garden.
While the headline was the play of C's All-Stars Jayson Tatum and Jaylen Brown combining for 70 points, the offseason addition of Malcolm Brogdon -- who finished with 16 points off the bench in his Boston debut -- was what caught the eye of current ESPN analyst and former NBA guard JJ Redick when asked who's coming out of the East.
On Wednesday's episode of ESPN's "First Take" Redick shared his thoughts on if he believed that the Milwaukee Bucks would make it to the NBA Finals, the retired sharpshooter responded with, "I think the Boston Celtics are the favorites in the East."
Reddick pointed out that with Khris Middleton and Pat Connaughton sidelined for a significant amount of time to begin the 2022-23 campaign, he's not so sure of Milwaukee's chances of coming out of the Eastern Conference, while the acquisition of Brogdon for the Celtics is exactly what the reigning East champs were missing during their run to the Finals.

"I look at what the Celtics did on their roster this offseason, and adding Malcolm Brogdon," Redick said. "He fills a need that they had off the bench, and he was great [Tuesday night against Philadelphia]. I expect the Celtics – they should be the favorites to come out of the East."

Meanwhile, Reddick's counterpart in Stephen A. Smith isn't quite sold on the Celtics, naming the absence of Ime Udoka being the main reason that he believes Boston won't return to the Finals -- despite being two wins away from winning a title back in June.

"I can't summarily dismiss the Boston Celtics -- they are the reigning Eastern Conference champions, and with [interim head coach Joe] Mazzulla there, we'll see what he does," Smith said on Tuesday morning's edition of "First Take." "But I believe that Ime Udoka is that special of a coach that [the Celtics returning to the finals] won't happen."

Smith, who called Udoka an "exceptional coach," but ultimately the NBA insider said that despite Brogdon leading the second unit, the Celtics can't overcome the loss of their head coach and went on to pick the Brooklyn Nets as his favorite to come out of the East -- the same team that got swept by Boston last spring.
Joel Pavón
Follow @Joe1_CSP