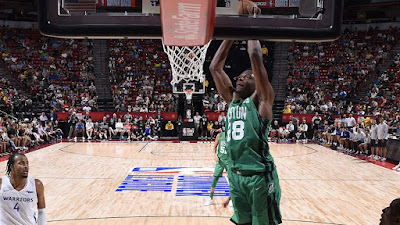 The Celtics announced Saturday they have signed Mfiondu Kabengele to a Two-Way contract, following the team's Summer League finale loss to the Brooklyn Nets in Las Vegas.
The 6-foot-10 big man averaged 14.8 points, 9.3 rebounds, 2.8 assists, and 1.8 blocks in 25.2 minutes per contest while shooting 55.9% from the field, 36.4% from three and 77.8% from the free throw line in four games played for this year's Celtics Summer League squad -- who finished with a 3-2 record.
Kabengele and rookie guard JD Davison (signed his deal 10 days ago) have both filled the C's Two-Way roster spots. The duo were very in-sync throughout their time together in Vegas connecting on the pick-and-roll that resulted in many alley-oop highlights. The pair will be allowed to play up to 50 regular season games in the NBA (no playoff eligibility), while splitting time with the Maine Celtics on a $502,000 salary.
At the age of 24, Kabengele has played a total of 51 games in the NBA between the Los Angeles Clippers and Cleveland Cavaliers after being drafted No. 27 overall by the Nets in 2019. The power forward/center played in 33 games for the G League Champion Rio Grande Valley Vipers this past season where he averaged 17.5 points, 9.7 rebounds, 1.5 assists and 0.94 blocks in 29.3 minutes, while connecting on 58.9% from the field and 39.6% from deep.

"Coming to the G League, it kind of solidified my beliefs of who I am as a player," Kabengele recently told CLNS Media. "Because you aren't able to go up-and-down (in the NBA) and practice can only show you so much compared to a game, so coming to a game and playing G League games against guys who could go to the league, some call down guys, some vets that came out like Isaiah Thomas, Lance [Stephenson] were there. Going against them, it gives you a big gauge of where you are. So, playing that year helped me out a lot to solidify what I thought of myself as a player."

The Celtics still have three roster spots available, as Brad Stevens has mentioned that the team has intentions to sign a veteran big to play behind Al Horford and Robert Williams III, following the re-signing of Luke Kornet two weeks ago and Daniel Theis being moved in the Malcolm Brogdon trade.
Joel Pavón
Follow @Joe1_CSP