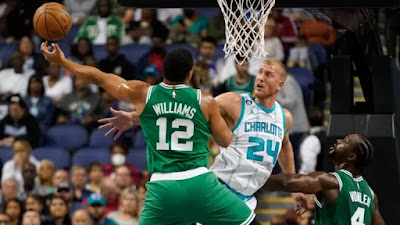 The shorthanded Celtics held on to beat the Charlotte Hornets 112-103 Friday night at the Greensboro Coliseum.
Jaylen Brown led Boston, who was without Jayson Tatum, Marcus Smart, Al Horford and Malcolm Brogdon -- all out due to rest -- with 19 points on 6-of-14 shooting, including 5-of-8 from deep.
Derrick White finished with 18 points, six assists, while Noah Vonleh recorded a double-double of 14 points (6-of-8 from the field) and 13 rebounds in his first start of the preseason. Justin Jackson and Payton Pritchard scored 16 and 15 points off the bench respectively to help the Celtics get passed the Hornets for the second time in four days.
Blake Griffin had a solid debut, recording seven points and nine rebounds in 16 minutes of action, following his signing being made official this past Monday.

"It felt all right, a little rust. I hadn't played 5-on-5 yet so it's always a little weird coming in a little late," Griffin said in his postgame interview with NBC Sports Boston. "But these guys are great, the coaching staff is great and I was glad we picked it up in the second half and got a win."

LaMelo Ball had a game-high 23 points, nine assists and Kelly Oubre Jr added 18 points to led the Hornets. Former Celtic Terry Rozier chipped in 14 points and P. J. Washington netted 12 points for Charlotte -- who remain winless in exhibition play through three games.
Despite trailing 35-22 after the first quarter and 62-57 at the break, the Celtics picked up in the third period, outscoring the Hornets 36-22 to take a 93-82 advantage into the final frame.
After blowing a 19-point lead on Wednesday and falling in overtime to the Toronto Raptors, Boston shot 43.8% from the field and 43.2% from behind the arc, while putting up 27 assists on 39 made baskets against Charlotte -- who was held to 38.2% shooting, including 10-of-37 (27%) from 3-point territory, but only allowed 10 turnovers while forcing the C's to turn the ball over 20 times.
The Celtics (2-1), who came back from be down by as many as 16 points in the first half, will have six days of training camp before traveling up north to Canada to face the Raptors once again in their preseason finale next Friday.
Joel Pavón
Follow @Joe1_CSP