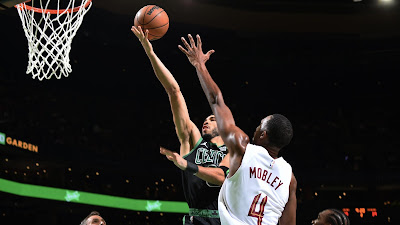 The Celtics blew another double-digit lead, as they fell to the Cleveland Cavaliers 132-123 in overtime Friday night at TD Garden.
Jaylen Brown and Jayson Tatum each finished with 32 points respectively, while going 22-of-41 from the field combined, but only connecting on 4-of-14 from deep.
Playing without Grant Williams (league suspension), Al Horford added 12 points and Marcus Smart chipped in 11 points, seven assists in the Celtics' second straight loss -- making them 3-2 on the season.
Caris LeVert (seven assists) and Donovan Mitchell each scored 41 points to help improve the Cavs to a 4-1 record. Evan Mobley added 19 points, 10 rebounds and Jarrett Allen also recorded a double-double of 12 points, 11 rebounds for Cleveland -- who have won four in a row and were without All-Star Darius Garland (eye laceration).
The Cavaliers opened the game on a 22-9 run, including 16 first quarter points from Mitchell, before the Celtics outscored Cleveland 60-40 the rest of the first half to take 75-62 advantage at the break against the league's second rated defense.
The Cavs went on 19-13 spurt in the final 5:29 of the third quarter, as Boston was only ahead by four entering the final frame. The C's ended up shooting 9-of-20 in the period and turned the ball over six times.
Cleveland took a 113-112 lead -- their first since the second quarter -- on a Mitchell corner 3-pointer with 1:10 left in regulation. Following a Brown go-head layup, Allen was fouled by Horford with 20.3 seconds remaining and he hit 1-of-2 free throws to tie the game. Tatum missed a 19-footer that sent the game into overtime.
In the extra session the Cavaliers went up 119-114 in less than two minutes and never looked back, outscoring the Celtics 18-9 in OT to put them away.
Despite hitting 51.2% from the field for the game, the Celtics put up 48 points in the second half and committed a total of 20 turnovers on the night to Cleveland's 16.

"We have to have make winning plays," Celtics interim coach Joe Mazzulla said. "We can't take anything for granted."