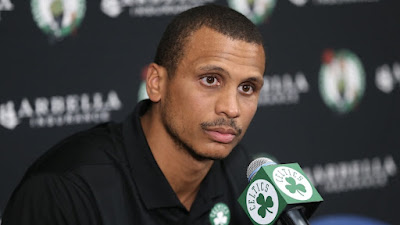 Joe Mazzulla made his first public appearance Monday since being named Celtics interim head coach, following the suspension of Ime Udoka for the entire 2022-23 season.
During the team's Media Day, Mazzulla (the league's youngest coach) held his first press conference to kick off the afternoon and though this wasn't the way he expected to get his first NBA head coaching gig -- a championship-contending roster in the midst of a scandal -- the 34-year-old seemed to already have a calm and steady approach to what lies ahead.

"The message is to first, give people space and time," Mazzulla said. "Not just for the players, but for everybody. It's an unfortunate situation for everyone involved, but you have to give people the time and space to feel and the time and space to heal. And that's key. You can't rush anything. And the great thing about this organization, the players that we have, and the season last year is we have a formula for what we need to do in order to get better every single day and get back to where we want to get to."

While from the outside looking in, it may appear that the Celtics might not respect Mazzulla given the circumstances, especially with the roster coming off a trip to the NBA Finals, it was clear on Friday when team president of basketball operations Brad Stevens placed trust in his now head coach and on Monday the players echoed that same vote of confidence.

"It's not an easy timing for him, or the rest of the staff, but he's an exceptionally sharp and talented person," Stevens said during his joint-presser last week. "I believe strongly in him and his ability to lead people and his ability to galvanize a room and get them behind him. Also his ability to organize and understand what comes with running a team during the season."

Still, Mazzulla went from assistant to his new role as head coach, but not before apparently putting a plan in place well prior to Udoka being suspended, so he's not worried.

"I'm in a fortunate situation because I've been here for three years, and we've had the offseason to kind of prepare for what we wanted to do heading into the season," Mazzulla said. "So there's not much to change at all. I think it's just about learning from last season and how to get better."

Despite Mazzulla heading into uncharted waters, he doesn't plan to add any more pressure on himself nor is he interested in changing the baseline culture of the Celtics identity built from last season's run to the Finals neither.

"I think it's more of a collaboration. I think we have to do this together," Mazzulla said. "I don't think we need to speed up authority or speed up decisions or speed up identity. We have to be patient. We have to really rely on the foundations that we built as far as relationships and the foundations and habits that we've built on the basketball court because they're successful. And so I think that's the most important thing is focus on all the things we're great at as a team and then how can we evolve and make those things even better to get to where we want to go."

Being the longest tenured on the C's coaching staff, Mazzulla became an assistant back in 2019 after being an assistant with the Maine Red Claws (now the Maine Celtics) when he first joined the organization in 2016. Mazzulla has been around this current core for a few seasons now and has the approval of the players going forward.

"We have a ship that is prepared to step up when things go down," said Grant Williams at his Media Day presser. "Joe is very, very important and special. He's a man that I spent time with this summer, that I can just speak on how intense, and how charismatic he is, and how passionate he is. And that was as an assistant, so I'm even more excited of what he's able to do as a head coach. I think he's prepared, I think he has a great leadership of the guys, and I can speak that he's the most capable person in the organization to take on that role. To fill that void or gap, so to say… I don't think that anyone in this organization doesn't respect Joe. He's had that presence since he's been a coach here."

Others also rallied behind Mazzulla such as All-Star Jayson Tatum, who says the established relationships he has with the players over the years is only going to help during the transition.

"I know how passionate he is about helping others," Tatum said during an interview with NBC Sports Boston. "That's really what he's been, he's been a great help to myself, to the other guys, to the team as a whole for the past few years that he's been here. And he’s motivated. And I think, with the right intentions, and if you're motivated, you're going to be successful. We're going to have to help him and he's going to have to help us. We're all in this together. And it's not like he's somebody new. It's just the same guy we know in a different kind of position. Just kind of looking forward to playing basketball."

Jaylen Brown also noted how Mazzulla has always believed in his game and how great of a player he could become.

"I'm optimistic," Brown revealed during his press conference. "I believe in Joe. Joe believes in me. I don't think he sees a limit in my game. He's coming in excited."

Even the veterans of the Celtics roster like Marcus Smart showed their appreciation for Mazzulla and gave him high praise as he becomes the interim head coach.

"Helps tremendously," Smart explained to reporters Monday afternoon. "It would've been different if we had somebody new that we didn't know that we had to build that connection with. Joe's been here. He knows the scheme, he knows the players, so it makes it a bit easier."

Of course the elder statesman Al Horford believes in Mazzulla, as he says the team is ready to have his back as they look to make another run to the Finals.

"As far as Joe goes, excited for him, excited for this opportunity," Horford said to the media. "He's somebody that we all respect, and we're going to be rallying behind him. We're going to really put in the time and the work to get this done."

The Celtics begin training camp Tuesday and will host the Charlotte Hornets at TD Garden on October 2 in their first preseason game.
Joel Pavón
Follow @Joe1_CSP