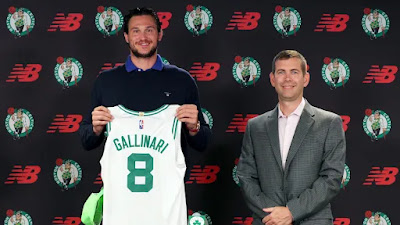 The Celtics announced Friday that Danilo Gallinari underwent successful ACL surgery on his left knee.
The forward, who signed a two-year, 13.3 million deal in July as a free agent, sustained the injury while playing for Italy in the FIBA World Cup qualifier back on August 27 and initially it was deemed a torn meniscus, but a thorough team analysis by the Celtics contradicted the original diagnosis and Gallinari is now expected to return anywhere from 6-12 months -- possibly missing the entire 2022-23 campaign.


Gallinari, 34, took to Twitter and released a statement following the procedure on the same surgically repaired knee that sustained a torn ACL back during the 2012-13 season.

"Yesterday I had successful ACL surgery. Now the focus is on my rehab and return to the game I love," Gallinari wrote. "I want to thank the Celtics organization and the medical staff at the New England Baptist Hospital. I also want to thank Dr. Antonio Orgiani and Dr. Rodolfo Rocchi for the support they gave me in Italy before surgery. And of course thank you to all of my fans for their continued support and well wishes. See you soon on the court."

A 14-year NBA veteran, Gallinari was signed by the Celtics to provide much-needed scoring off the bench after averaging 11.7 points and 4.7 rebounds in 66 games with the Atlanta Hawks last season.
With Gallinari and Robert Williams (out 8-12 weeks) sidelined, the Celtics find themselves a bit thin in the frontcourt with Al Horford and Grant Williams as the only healthy bigs on guaranteed contracts returning from last season, leaving Sam Hauser (partially guaranteed), Luke Kornet (partially guaranteed) and Mfiondu Kabengele (Two-Way deal) to battle for a backup spot when training camp opens up this week.
Joel Pavón
Follow @Joe1_CSP