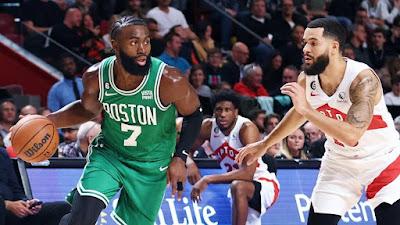 The Celtics once again went to overtime with the Toronto Raptors during the preseason only to fall short 137-134 Friday at Centre Bell in Montreal, Canada Friday night.
Jaylen Brown and Derrick White each finished with a team-high 23 points respectively in the finale, while Jayson Tatum netted 21 points to go along with nine rebounds and five assists before getting ejected in the final seconds of the third quarter -- following getting hit with his second technical foul.
Tatum was called for a foul against Scottie Barnes and the Celtics All-Star disagreed with the call by waving the referee off -- which warranted a technical foul after already having one from earlier in the night -- leading to his ejection.

"JT got a tech for I guess slamming the ball," Grant Williams said in his postgame presser. "He said 'that's BS,' or something simple -- something that you normally don't get a tech for. Then, that was a tech...I guess JT waved him off, got ejected."

Marcus Smart added 15 points on 4-of-7 shooting for the Celtics, who concluded exhibition play at 2-2 after two losses to the Raptors in nine days.
As a precaution, Malcolm Brogdon sat out the second half with a leg injury, before scoring eight points in 14 minutes off the bench.
OG Anunoby led Toronto with 32 points on 13-of-21 from the field, including 4-of-5 from deep. Barnes scored 25 points and Precious Achiuwa chipped in 18 points, eight rebounds for the Raptors (3-2) in their second overtime win over Boston after beating them 125-119 back on October 5.
The Celtics were ahead 36-35 after one before using a 13-0 run to open up the second quarter, but the Raptors held their own the rest of the period, as they only trailed 66-63 at the break.
Toronto had all the momentum after taking full advantage of the C's being hit with three technical fouls late in the third -- on Tatum, Grant Williams and the team also got called for a delay of game as Tatum did not leave in a timely manner once he got ejected.

"In that scenario, we got to do a better job getting JT off the floor, and I got to do a better job just holding my tongue and not making comments," Williams explained. "It's what preseason's all about: you got to learn and understand you're going to make mistakes. I think that's something we'll improve on and not carry over into the regular season."

Meanwhile, the Raptors took an eight point lead -- their largest of the night -- to start the fourth quarter. But in a back-and-forth final frame of regulation to which each team managed to score 29 points apiece, an additional five minutes was needed to decide this one -- while Joe Mazzulla pulled his starters.
Still, the Celtics were out-rebounded by Toronto 56-44 -- with the Raptors grabbed 22 offensive boards. Boston also turned the ball over 20 times and were outscored in the paint 68-40.
With the C's shooting 44% from the field and 19-of-54 (35.4%) from behind the 3-point arc, they finished with 24 assist on 40 made baskets.
The Celtics will open up their regular season on Tuesday night against the Philadelphia 76ers from TD Garden. Tip-off is at 7:30 pm on TNT.
Joel Pavón
Follow @Joe1_CSP