Grant Williams apologizes for his suspension after bumping referee 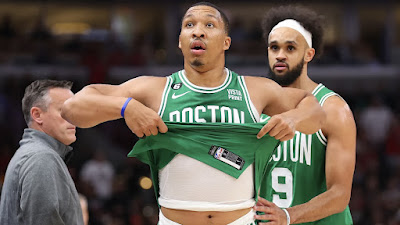 Grant Williams spoke to reporters for the first time since the NBA announced his one-game suspension without pay for bumping a referee.
The Celtics big man was ejected in the fourth quarter of Monday night's 120-102 loss to the Chicago Bulls after what the league called "recklessly making contact and directing inappropriate language toward a game official."
Williams said he inadvertently ran into referee Cheryl Flores when he popped up off the floor immediately and ran toward the bench after being whistled for a blocking foul with 8:58 remaining as the game began to get away from the Celtics.

"I saw block, and kind of got up and tried to run off in disagreement, and then I look up, and I'm like, 'oh crap, I'm about to make contact.' I tried to avoid it and my glute hit her hip, and that's why I made contact," Williams said in his Thursday's post-practice presser. "It's one of those things when earlier in the game, [Bulls center Nikola] Vucevic was trying to throw the ball down and [referee] Natalie [Sago] was under him, but she ducked. But things like that in the position, emotion-wise, you're going. And I definitely [was] nowhere near intentional, nowhere near anything of that nature."

Still, despite Williams not intentionally meaning to bump into Flores, he understands his suspension and that the league can't allow players to make contact with an official.

Williams, who averaging a career-high 9.5 points, 4.3 rebounds and 1.5 assists in 24.8 minutes per contest this season, will not appeal the league's decision as he'll sit out Friday night when the Celtics host the Cleveland Cavaliers at TD Garden.

"You never want to let your team down, it's something that I feel like I did," Williams said. "When it comes to the punishment, it's just. I made a mistake, so for me, it's something I probably won't challenge. Especially the fact that one, it's a female referee, and two, it's not something we want our players to be doing in the league. No matter whether it was inadvertent or not, I gotta be better, I gotta be more mindful and conscious of my surroundings and conscious of my mental state, and not letting anything affect me during the game."

The 23-year-old center also knows that he along with the rest of his teammates have to control their emotions when it comes to the officials -- as the Celtics don't always have the best reputation of constantly arguing with the refs.

"I have to be better in a sense of being more mature and understanding that your emotion is as good as what you base yourself growing as a player," Williams said. "It's just a matter of channeling that and using it in a better direction, and using that a little bit as directing that towards your teammates and making sure everybody's engaged and motivated. Direct them towards yourself if you're not having a great game yourself.
"For me, I'm going to try to do a better job of just probably not communicating as much, to understand that the game is more important than anything else. We have to be respectful and communicate more, but I'll try my best to hold my tongue as much as I can."

With Williams out, the Celtics will look to rely on Sam Hauser, Blake Griffin and most likely Luke Kornet to play off the bench behind Al Horford and Jayson Tatum against the Cavs -- which tips-off tonight at 7:30 PM ET.
Joel Pavón
Follow @Joe1_CSP