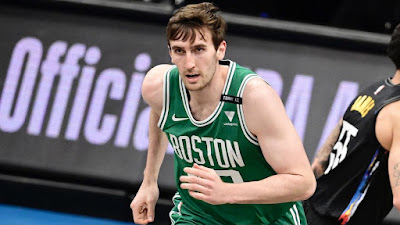 The Celtics have reportedly re-signed veteran big man Luke Kornet to a two-year, partially guaranteed contract, according to Yahoo Sports' Chris B. Haynes.
Following an eventful start to the offseason for C's president of basketball operations Brad Stevens with the reported pending signing of Danilo Gallinari and the trade for Malcolm Brogdon, Kornet provides some end of the bench depth for a team looking to make another run to the NBA Finals.
Kornet, who was initially acquired by the Celtics at the trade deadline in 2021, is entering his sixth season in the league after spending the 2021-22 campaign with the Maine Celtics and on 10-day contracts with the Milwaukee Bucks and Cleveland Cavaliers, before returning to Boston this past February.
The Celtics currently have 11 signed players with free agency still very much underway, as a center that remains available on the market and has also been linked to Boston is Thomas Bryant.
Stay tuned for more updates, as Stevens continues to reshape the roster.
Joel Pavón
Follow @Joe1_CSP