Why Jayson Tatum, Jaylen Brown would trade individual accolades for an NBA championship 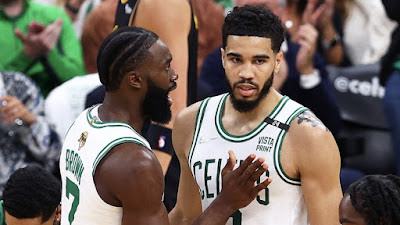 Jayson Tatum and Jaylen Brown won't forget anytime soon how the Celtics were up 2-1 over Golden State only to lose in the NBA Finals nearly four months ago.
As tough as the three straight losses were and watching the Warriors hoist the Larry O'Brien trophy on their home floor at TD Garden has made it that much more motivating to lead the Celtics franchise to its 18th championship.
In a recent interview, Tatum and Brown sat with Chris Forsberg of NBC Sports Boston, to discuss what drives them after all they have been through together in Boston.

"[Pairing with Tatum has] indirectly and directly made me better because I wanted to continue to make jumps as he was continuing to make jumps," said Brown. "That just ultimately drives you to greatness, right? So I think it's been huge. If you ask me, now, as we're trying to win, and we're trying to build, I think just being on the same page is the most important thing. Because now, the more we work together, the harder it's gonna be to stop us. So that's something that we started to develop and work on in the last 12 to 18 months. I think that we still got a lot of room to grow in those areas. But that's the key to winning games. At the end of the day, individually, we can be whatever in this league, I believe that. But, me, I want to win. He wants to win, too. So that's what it comes down to."

With Brown entering his seventh year with the Celtics this upcoming season and it being Tatum's sixth, they have put to rest the notion that both can't thrive together or win, following being moments away from taking a 3-1 series lead over Golden State in the Finals.

"I think, [Brown] being a year older than me, and kind of being the young guys going through this and always pushing each other and having somebody that is as competitive, as ambitious as me, at relatively the same age, has been helpful," said Tatum. "Then kind of putting it all together -- helping him out, helping me out, helping each other out so that we can be the best for the team. Individually, we can do it all. We can accomplish whatever we want to. But getting to that championship and losing was the worst feeling ever. And you realize that nothing else matters. All the individual stuff, I would trade all that in to win a championship. And I believe that we're gonna do it."

Despite questions that may linger with the situation surrounding Ime Udoka or the injuries that exists on the roster prior to the start of the 2022-23 campaign, Tatum and Brown understand it's on them to lead the Celtics through the rough patches to eventually achieve the same goal.

"I think tough times and uncomfortable situations bring people closer together," Tatum told Forsberg. "And, obviously, the guys are going to look to us for a lot of different things. And we just got to be that much more together and closer with everything going on. And I believe 1,000 percent that we will be."

While the All-Star duo proved their naysayers wrong this past year, as the Celtics completed one of the biggest mid-season turnarounds in recent history that resulted in a deep playoff run and getting over that hump into to the Finals, Tatum and Brown know there's just one last thing they have to accomplish together to essentially validate themselves once and for all.

"For me, it was silly at the time, but I how things work, you just got to sit through the storm and whatnot," said Brown. "I just always kept that in perspective, and also kept receipts because I remember who said what."
Added Tatum: "I didn't feel like it made sense at the time. Because we've been in the playoffs every year, got the conference finals three times, got to the championship. And like [Brown] said, you never forget who said what. We see everything."

Meanwhile, regardless of what is written about them, Tatum and Brown are both clearly focused on taking that final step together into the exclusive Celtics' brotherhood of being champions while wearing the green and white -- they know there's still unfinished business.
Joel Pavón
Follow @Joe1_CSP