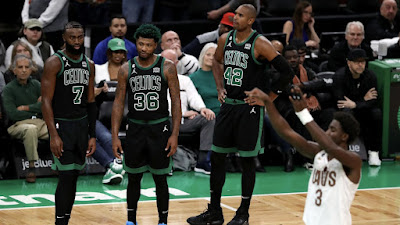 The Celtics fell to the Cleveland Cavaliers in overtime, 132-123 Friday night at TD Garden for their second straight loss.
Boston gave up least 115 points for the fourth time this season in just five games played -- a far cry from the defensive juggernaut they were during the 2021-22 campaign that only allowed an NBA best 104.5 points per game.
Despite their offense, especially through the the first three games that led the Celtics to wins, their poor defense caught up to them against the Chicago Bulls and now the Cavs in back-to-back defeats.
However, Jaylen Brown isn't too concerned after the Celtics' current record of 3-2, as the All-Star wing believes his teammates just need to re-focus.

"It's on us," Brown said in his post-game presser. "We gotta come out, and those are all controllable things. So, we;re not concerned. I think that we've done it before and we can do it again. It's just re-locking in, re-focusing, and emphasizing on things that we should be prioritizing right now."

Brown finished with 32 points on 11-of-22 shooting and 2-of-7 from deep, to go along with eight rebounds and four assists. He also said that the offensive glass and second chance points played a factor in the loss to the Cavaliers -- as they lost the rebound battle 42-34.

While interim head coach Joe Mazzulla also agrees that the Celtics have to be more consistent on the defensive end, he doesn't think this will turn into some sort of trend -- as Boston currently ranks 29th in rebounds and giving up 118.6 points per contest.

"I think we just have to execute," said Mazzulla in his post-game comments. "I don't know if it's a trend or an issue. I thought -- we were winning the game. And so, we had a chance to win the game, we didn't close out certain possessions. So, I don't know if it's as much of an issue as it is just being more consistent on both ends of the floor and not relaxing. And just understanding, we have to earn every win. So, I think that's what the focus is."

Still, the Cavilers were without their All-Star guard Darius Garland, but Donavan Mitchell and Caris LaVert each scored 41 points apiece on a combined 28-of-46 from the field. Plus, the Cavs starting big men of Jarrett Allen (12 points) and Evan Mobley (19 points) also combined for a total of 21 rebounds.
Though the Celtics have been out-rebounded 102-78 in their last two games, Jayson Tatum says he's also not too concerned and is confidant that his teammates can get back to the defense they know that they're capable of playing.

"We know the level of defense that we can play as a unit," Tatum told reporters. "Then it's just about finding ourselves and getting back to that place."

The Celtics host the Washington Wizards Sunday night at home, as tip-off is at 6:00 PM ET.
Joel Pavón
Follow @Joe1_CSP