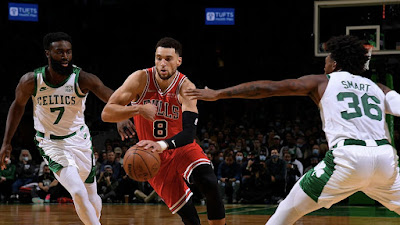 The Celtics blew a 19-point lead to lose 128-114 to the Chicago Bulls Monday night at TD Garden.
Jaylen Brown scored 28 points on 10-of-18 shooting, while Al Horford recorded another double-double with 20 points and 10 rebounds for the C's who have loss three straight and remain winless at home.

"We got up, got comfortable, got a little bit too cute thinking the game was over in the third quarter, said Ime Udoka, who is now 2-5 in his first seven games as head coach. "We started celebrating early. It's a good lesson learned: you mess with the game, it will come back to bite you."

Jayson Tatum struggled once again, as he shot 8-of-22 from the field to finish with 20 points and Marcus Smart returned from a non-COVID illness to chip in 16 points.
DeMar DeRozan led all scorers with 37 points, going 15-of-20 from the floor and Zach LaVine added 26 points after getting off to a rough start in the first half for the Bulls, who are 6-1 on the season.
The Celtics led 94-75 with 2:53 left in the third period and took a 103-89 advantage into the final frame. The Bulls scored 12 unanswered point start the fourth quarter to get within two with over eight minutes left to play.
Rookie Ayo Dosunmu (14 points off the bench) hit a 3 with 6:53 remaining to put the Bulls ahead 106-105. A Horford dunk put the Celtics back up one briefly before Chicago went on an 18-2 run.
Tatum was 1-of-8 from the field, managing only two points in the fourth and Brown went scoreless on just two attempts.

"We're running plays for our best players. Every team knows that. They do a good job of shutting that down," said Marcus Smart during his postgame presser. "We can't allow that."

Meanwhile, the Celtics were outscored 39-11 in the final period and the Bulls overall closed the game out on a 53-20 run to hand Boston their worst loss of the young season -- which lead to familiar boos from the home crowd.

"We need to finish games and not stop playing. Or, I mean, not relax," said Al Horford in his postgame comments. "We need to continue to play. And to play through adversity."

Despite turning the ball over 18 times, Chicago shot 57% from the field (41.9% from 3) and outrebounded the Celtics 50-38. Boston was also outscored in the paint 54-36 in their epic collapse.
The C's will look to snap a three-game skid when they face the 1-3 Magic in Orlando Wednesday night and then the Miami Heat (5-1) Thursday on a second night of a back-to-back.
Game Notes:
Boston shot 43.8% from the field and 15-of-33 (45.5%) from behind the arc. They also handed out 20 assists on 42 made baskets, while the Bulls assisted 30 times on 49 made attempts. Robert Williams returned to the lineup after missing the Celtics' loss to the Wizards Saturday, as he put up six points, five rebounds and an assist in 24 minutes of action.
Joel Pavón
Follow @Joe1_CSP