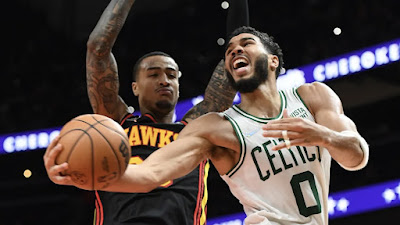 The Celtics missed a golden opportunity to climb above .500 for the first time this season, after a 110-99 loss to the Atlanta Hawks Wednesday night at State Farm Arena.
Despite 34 points from Jayson Tatum for a game-high on 12-of-22 shooting from the field, to go along with nine rebounds and five assists, the Celtics fell to 7-8 on the year. While the All-Star knocked down five 3-pointers on 12 attempts, the rest of the team was just 6-of-29 from deep.

"We're not where we want to be," Tatum said during his postgame presser. "The more we can play with pace, guys will get easier looks. We'll knock down some shots."

Grant Williams filled in as a starter for Robert Williams, who was out with a knee injury and finished with 18 points on 6-of-12 from the field, but the C's only hit 43.5% of their shots.

"Robert is a huge piece of what we do, but I thought we did a good job defensively, " said Grant Williams in his postgame comments. "We've just got to do a better job putting the ball in the basket."

The two former Hawks, Dennis Schröder added 15 points and Al Horford chipped in 13 for Boston.
John Collins led Atlanta with 20 points, 11 rebounds and Kevin Huerter netted 19, including 5-of-7 from behind the arc. Cam Reddish also scored 19 points, while Trae Young had 18 points and 11 assists for the Hawks -- who are 7-9 on the season and 6-1 at home.
The Celtics trailed 58-49 at the break before cutting their deficit to four on two separate occasions to start the second half, including a Tatum 3 that made it 70-66 with 5:54 left in the third period. However, the Hawks outscored Boston 21-11 to finish the quarter and never surrendered their double-digit lead the rest of the way.
Even though the Celtics' defense limited Young to 4-of-12 shooting from the field and 0-of-6 from behind the arc, Atlanta still hit 50.6% of their attempts from the floor.

"I don't feel like we found our offense tonight," said C's coach Ime Udoka after the loss. ..."You like the looks we're getting, high quality looks, a lot of open looks. When teams make theirs and you don't make yours you have to rely on your defense, so we've done that for the most part, but you like to not stress your defense as much by making those shots."

Both teams scored 44 points each in the paint and were nearly even in the rebounds department, as Boston won the battle 42-40.
The Celtics return to TD Garden, where they'll open up a four-game homestand with their rival Los Angeles Lakers on Friday night. ESPN will have the tip-off at 7:30 PM ET.

Boston only made 26.2%  of their attempts from 3-point territory, while they finished with 24 assists on 37 made shots overall. The Hawks were 13-of-37 from 3 and had 28 assists on 41 buckets.
Jaylen Brown missed his sixth straight game with a hamstring strain, but the Celtics are hopeful he'll make his return against the Lakers.
Joel Pavón
Follow @Joe1_CSP