Jayson Tatum goes off for season-high against favorite childhood team 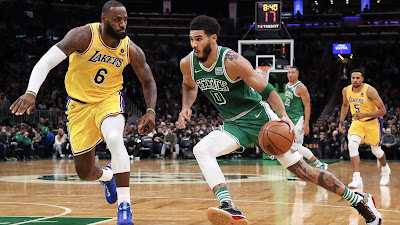 It's may be safe to say that Jayson Tatum has snapped out of his shooting slump after going back-to-back games of hitting at least 50% on attempts from the field.
His latest performance of 37 points on 13-of-26 shots, including 4-of-9 from deep and a perfect 7-of-7 at the free throw line against the Lakers, was easily the best of the young season in an impressive Celtics' 130-108 win at TD Garden.

"I didn’t think I would be shooting this bad at the beginning of the season, but I was never worried. I put too much work in to ever worry or doubt. Hopefully, I can keep it up," Tatum told the media during his postgame presser Friday.

Before the Celtics' 110-99 loss to the Hawks Wednesday, Tatum was shooting well under 40% from the floor and from 3-point territory. The All-Star forward came off a 12-of-22 night in Atlanta to finish with 34 points - the most he had scored since he netted 32 against the Dallas Mavericks nearly two weeks ago before recording a season-high vs Los Angeles.
Meanwhile, this isn't the first time Tatum has relished on the biggest stage when the lights were at their brightest, especially against his favorite team as a kid. The 23-year-old enjoys playing against the Lakers and understands what it means historically each time the Celtics face their biggest rival.

"I think that's just you going out there and being competitive and trying to win at all costs. You respect the guys on the other team. You see them outside of basketball and things like that. I may not be the most emotional person, but when I step on the floor, I don't care if it's Brad Beal; I'm trying to go at him, and that's somebody I grew up with," said Tatum on his aggressive mindset.

"I think that's a mentality you have, when I step on the floor, it's my team against yours, and after the game, it's whatever, but these 48 minutes, I ain't got nothing for you," Tatum added.

Still, the icing on the cake for Tatum playing his best game against the Lakers was doing it in front with Hall of Famers Bill Russell and Paul Pierce -- two Celtics icons in attendance -- calling it a "surreal moment."

"Kobe was my favorite player, but I watched a lot of guys play. But somebody like Paul that could get his shot off against anybody, he was never rushed, amazing footwork, always got to his spot, great touch, somebody I always watched and stole moves from, watched how he played the game. He could do everything. He wasn't the most athletic guy but always figured it out," Tatum said of Pierce, someone who he models his game after.

Tatum continues to bring it offensively every time he faces the Lakers. In nine games played against the team he use to root for, the Celtics forward is averaging 20.7 points, 6.2 rebounds, and 2.9 assists per contest, while shooting 50% from behind the arc and 52.8% from the field, according to StatMuse.
Joel Pavón
Follow @Joe1_CSP