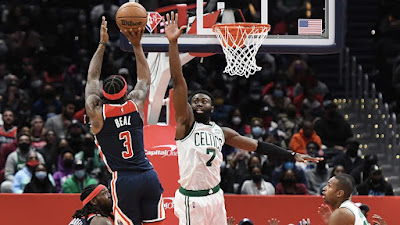 The Celtics once again played from behind, as they fell to the Washington Wizards 115-112 in double overtime Saturday night for their second straight loss.
Despite a bounce back performance from Jaylen Brown, who scored a team-high 34 points on 14-of-24 shooting and 27 points from Jayson Tatum, the Celtics came up short at Capitol One Arena after going 2-of-26 from beyond the arc.

"We shot the ball terribly tonight, but it was kind of old-school where it was just rebound and attack the paint," Brown said in his postgame presser. "Despite not shooting the ball well, we still could've won this game, and that's the sign of a good team. We've just got to figure it out at the end. We were right there. Tough loss, but we had tremendous fight about ourselves. I think we played the game the right way, for the most part."

Brown went 0-of-5 from deep, while Tatum struggled offensively, shooting 10-of-32 overall (0-of-5 from 3), but did record a career-best 15 rebounds on the night.
Josh Richardson finished with 18 points off the bench, as Al Horford chipped in eight points, 10 rebounds, five assists and five blocks for Boston -- who are now 2-4 on the season.
The Celtics were without Marcus Smart and Robert Williams, as both were ruled out due to a non-COVID illness.
Bradley Beal led all scorers with 36 points, while Montrezl Harrell notched another double-double of 20 points and 14 rebounds. Spencer Dinwiddie also had 20 points and Kyle Kuzma registered 17 points, 17 rebounds for the Wizards -- improving to 5-1 with their second victory over Boston in three days.
Playing in overtime for the third time in three games, the Celtics went on a 6-0 run to start the extra period and take a 109-103 lead with 3:28 left in the first OT. Boston wouldn't score again and the Wizards tied it up on a Beal layup in the final 25 seconds to force a second overtime.
Boston only scored three points in the second OT, as a pivotal moment with 1:16 left to play could have benefited the Celtics - who were ahead 112-111 -- when the officials originally called a foul on Deni Avdija, but following a video review of the block on Tatum -- it was ruled a clean play.
Beal hit a runner off the glass on the very next possession to give Washington the lead for good, before Dinwiddie made another jumper to pull out the win with 20 seconds left in the second extra period.
While the Celtics only hit 41.1% from the field, they also held the Wizards to just 36.5% shooting, something coach Ime Udoka was encouraged by despite the loss.

"I challenged them and they responded," Udoka said after the game. "We had a few days of film session to clean up and get back to the training-camp-type practice and go over some fundamentals that had slipped a little bit with all these extra overtime games and trying to get the balance of getting guys rested, but also having them have practice time. They accepted the challenge and they played extremely hard tonight. No complaining about that at all; you just wish the offensive end would have caught up to our defense."

Boston returns home to host the Bulls (5-1) on Monday night, tip-off is scheduled for 7:30 PM ET.

Game Notes:
The Celtics outscored Washington in the paint 66-46, but were outrebounded by the Wizards 62-54. Romeo Langford returned to the lineup for Boston after missing the last three games. He finished with two points, four rebounds and two assists in 18 minutes of action.