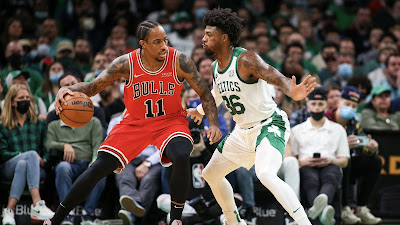 Marcus Smart seemed cool, calm and collected at TD Garden when he spoke to the media following the Celtics' 128-114 loss to the Chicago Bulls.
However, what Smart -- who finished with 16 points on 5-of-11 shooting -- had to say about his All-Star teammates Jayson Tatum and Jaylen Brown, definitely raised some eyebrows when asked how he could get the C's offense to turn things around as the starting point guard.

"There's only so much I can do without the ball in my hands, I'm just standing in the corner," Smart said in his postgame comments Monday night. "We're running plays for our best players, every team knows that. They do a good job of shutting that down. We can't allow that. When they shut that down, we can't keep trying to go to those guys.

"I do everything I can on the other end to try to combat that. I try to talk, I try to make plays, get those guys the ball where they need it, where they want it."

Brown had a team-high 28 points, while Tatum continued with his shooting woes, scoring 20 points on 8-of-22 from from the field. Both went a combined 1-of-12 from the floor and manage to record only two points in the Celtics' epic fourth quarter collapse, where Boston was outscored 39-11 after forfeiting their 19-point lead in the third.
With a 2-5 start to the season and a now a three-game skid, Smart, the longest tenured Celtic, simply sounded frustrated with these losses so far.

"I mean, I would just like to play basketball," he said. "Every team knows we are trying to go to Jayson and Jaylen, and every team is programmed and studied to stop Jayson and Jaylen. I think everybody's scouting report is to make those guys try to pass the ball. They don't want to pass the ball and that's something that they're going to learn. They're still learning and we're proud of the progress they are making, but they are going to have to make another step and find ways to not only create for themselves but create for others on this team, to open up the court for them later in the game where they don't always have to take those tough shots or take tough matchups when they do get the 1-on-1 and see a trap. Just reading that.

Tatum and Brown did not speak to the media but Al Horford was asked to weigh in on what he thought could get the two Celtics stars better looks.

"We just have to make sure we continue to execute, and we need to execute better," Horford said during his postgame presser. "And when I say execute, it's setting screens when we need to set screens, not turning the ball over, that's important, and I think if we do those things, I think we'll be in a better position."

With the Celtics still winless at home, they're heading out on a three-game min road trip in Orlando and Miami for a back-to-back beginning Wednesday night, before traveling to Dallas Saturday.
Joel Pavón
Follow @Joe1_CSP