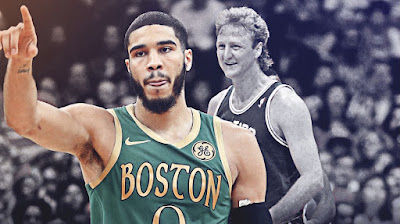 Jayson Tatum has moved passed one of the greatest players in basketball history when it comes to the Celtics' all-time 3-pointers made list.
On Wednesday, Tatum hit his 650th 3-point field goal of his career in Boston's 123-104 blowout loss to the Brooklyn Nets, one more than Hall of Fame and Celtics legend Larry Bird -- in 589 fewer games.
Two and a half decades later since Bird's retirement and Tatum is in sole possession of fifth all-time in the franchise's 75-year history.
Bird at one point was the Celtics all-time leader in both 3-pointers made and attempted from 1986-88, averaging 1.9 shots from behind the 3-point arc during his 13-year career, as the NBA adopted the 3-point line during Bird's rookie campaign (1979-80). Tatum averages 5.4 shots from 3 per contest in his four-plus year career. Entering play Wednesday, Tatum was shooting an average of 8.7 3-pointers per game.
So far, Tatum has the better 3-point average in a head-to-head with Bird at 39% vs. 37.6%.
Next up on the Celtics 3-point list is Tatum's current teammate Marcus Smart, who is closing in on 700 3s made. Jaylen Brown -- who returned to action Monday against the Houston Rockets after missing eight games with a hamstring injury, is seventh on the franchise list with 580.
The top-three 3-point shooters in Celtics' history that still remain are Paul Pierce (1,823), Antoine Walker (937) and Ray Allen (798).
Joel Pavón
Follow @Joe1_CSP