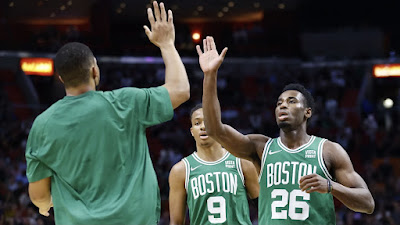 The Celtics finally put their added depth from the offseason to work Thursday night, giving a much needed boost to a struggling Jayson Tatum and Jaylen Brown.
The two All-Stars only scored a combined 27 points on 8-of-27 shooting from the field in the Celtics' 95-78 blowout win over the Miami Heat.
With Josh Richardson out with a foot injury, Ime Udoka turned to Aaron Nesmith, Romeo Langford, Dennis Schröder and the rest of his bench to provide not just a spark on offense, but some quality defense against one the league's best teams.

"At times we would have brought Jayson back in at a point, we went with the young guys who were rolling," Udoka explained to the media postgame. "They were playing so good defensively that we didn't want to break the rhythm of that group ... we really wanted to keep that core in there and reward them for how well they were playing."

"We feel like every game is important, just to give the starters some help coming off the bench and some energy," Langford in his postgame presser. "We knew it was the second night of a back-to-back, so we had to bring it a little bit more because we knew from last game, guys were going to be a little tired. I felt we did that."

Schröder, who's plus-26 differential was a team-best, also recorded six assists, five rebounds and two steals - with one of them ended up being a coast-to-coast layup. The veteran guard took on a lot of the duties at point guard and scoring burden off of Marcus Smart.

"Everybody was panicking seven games in," Schröder said in his postgame comments. "But at the end of the day, we just try to get better day-by-day, try to keep improving until it really, really matters. We try to put the puzzle together and of course, we needed that one as well."

While the Heat were making their run in the third quarter, Langford nailed a key corner 3 to stop the bleeding, as he was 4-of-8 from floor and finished with the team's second best differential of plus-25 on the night.

"I didn't even know that was a big shot," Langford said. "I was just shooting, just playing the game and letting it come to me. It does feel good to see things go my way."

For Nesmith, his differential of plus-15 was the third best on the team after netting a season-high 13 points, including 3-of-5 from beyond the arc in 17 minutes of playing time. The second year wing nailed his only 3-point attempt in the win over the Magic -- as his first points of the season -- before being called upon late in the first quarter against the Heat.

"I'm always prepared," Nesmith said to reporters postgame. "So whenever my name is called it's not a shock to me just because I keep the same schedule every day. So whether I play or don't play, I'm ready to play at all times."

It was only last week that Nesmith and Langford were among the four players that the Celtics reportedly picked up their 2022-23 team options on. Thursday night was huge for their development, taking full advantage of early season minutes. If Richardson and possibly Brown (hamstring tightness), who left the game in the fourth against the Heat, are out for any significant amount of time -- look for both Nesmith and Langford to be ready for an increased role like being a starter.

"I see it every day," Schröder said of Nesmith. "You know how you wake up, put in work, and try to get better at things? It translated today and it showed that he was well prepared and that he's ready whenever his name is called and it's huge for him."