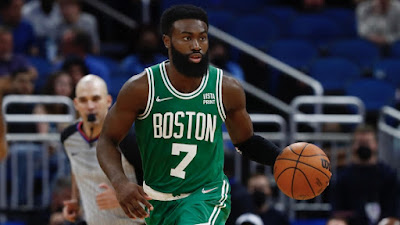 The Celtics reportedly had a players-only meeting Tuesday ahead of their 92-79 win over the Orlando Magic the following night.
According to insider Adrian Wojnarowski, who broke the story late in the second quarter of the Celtics matchup against the Magic while on ESPN's NBA Countdown, the gathering may have been counterproductive.

"They had a players-only meeting, and Marcus Smart, Jayson Tatum, and Jaylen Brown did talk about the collapse against the Bulls and Smart's comments about those two not passing the ball at times," Wojnarowski said Wednesday night. "It was emotional at times, but in the end, perhaps not a terribly productive meeting, maybe not even beneficial. These are issues with this team, with this group, that have been going on for a while."

After the game, Ime Udoka was asked about Woj's report, to which the Celtics coach said the discussion took place prior to a scheduled team dinner that happened organically on its own.

"It wasn't really a players-only meeting," Udoka said during his postgame presser. “We had a team dinner scheduled way before anything happened. That was planned for some weeks now and we gave the players their time before the coaching staff and everybody else came down."

Jaylen Brown gave a somewhat different response when he addressed the players-only meeting, saying his teammates used the opportunity to talk about game-planning against the Magic more so than anything else.

"The last few days, we've just been focused on Orlando," Brown said to reporters after Wednesday's win over the Magic. "That was the goal: come out, try to get a win. That was it. Team meeting (was) just an opportunity to talk as a group, get some communication going in, and move forward. At the end of the day, we've been playing basketball together for a long time, all of us, especially our core group. So, when it comes down to it, it's all about trying to find ways to win, and that's what the conversation was about, etc.
"The last two days, we've just been focused on Orlando, and now we're focused on Miami."

It remains unclear whether the Celtics used the time to discuss whatever they wanted to get out in the open two weeks into the season, especially after the team blew a 19-point lead in an ugly loss to the Chicago Bulls on Monday night -- which prompted Marcus Smart to make some controversial comments about his All-Star teammates -- or not.
Still, Brown bounced back nicely with a 28-point showing in Orlando, despite Smart's remarks towards him and Jayson Tatum. The Celtics wing also addressed that topic for the first time since the historic fourth collapse to the Bulls at TD Garden.

"In the midst of trying to win games, it's something that we probably didn't need," Brown said about Smart's comments after the Celtics win, Wednesday night. "But, we all communicate and talk to each other. So, we're always trying to find ways to win and I'm open to any and everything when guys bring it to me, coaching staff. I'm always watching film trying to better myself and be a better basketball player and find ways to make my teammates better. So, it felt good to get a win today."

Brown was scheduled to speak to the media following Smart's presser on Monday, but declined to make himself available after the loss to the Bulls, as did Tatum.
However, don't think that Brown and Smart harbor any ill-will towards one another following the veteran guard's comments. The two have spoken to each other since the remarks were made and they want to use this situation to help have a productive season going forward.

"We definitely have spent a lot of time with each other, which makes it good to be able to talk to somebody but also it's a lot of ups and downs that you go through that we're family and things like that," Brown said about his relationship with Smart. "I think we have healthy conversations moving forward. Like I said, the energy is just focusing on winning, that's it."

Meanwhile, the rest of the Celtics roster could use this as a learning experience in order to have a start fresh and turning things around. Winning games and getting back to .500 would help the locker room tremendously, especially when it comes to dealing the media.

"Just a matter of staying with it this time," Udoka added after Wednesday's win. "That was the message: Start good; finish well. We did that throughout the game. As we were going through the game, I just kept telling them don't get complacent. We've been here before."

At 3-5, the Celtics have the Heat (6-1) on deck in Miami Thursday night, before traveling to Dallas to wrap up their three-game mini road-trip on Saturday.
Joel Pavón
Follow @Joe1_CSP