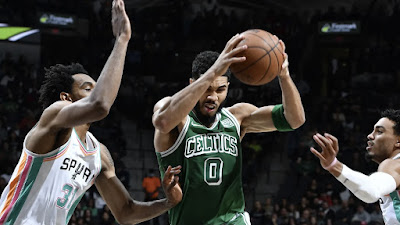 The Celtics came back from a 24-point deficit, but couldn't close the deal as they fell to the San Antonio Spurs Friday night 96-88 at the AT&T Center.
Jayson Tatum finished with 24 points and 12 rebounds, while Jaylen Brown added 16 points. Marcus Smart chipped in 13 points, seven rebounds and eight assists for the C's, who are now 10-10 on the season.
Dejounte Murray led all scorers with 29 points, to go along with 11 rebounds and Keldon Johnson also recorded a double-double of 17 points and 14 rebounds. Derrick White netted 17 points for the 5-13 Spurs -- to help snap a six-game skid.
Boston opened the first quarter trailing 10-3 and going 1-of-12 from the field which led to a timeout five minutes into the game. The Celtics finished the period shooting 5-of-26 and a season low 14 points and were down by 16.
The deficit grew to 24 in the second, before the C's trailed 52-37 at the break and were only hitting 28% of their shots and 4-of-19 from deep.

"Obviously, the second half was a different story there," Ime Udoka said following the loss. "We scored the ball extremely well, just can't dig ourselves that hole. Come out flat for no reason. We know what they're going to do defensively. Just have to continue to play together."

The Celtics took its first lead of the night on a Grant Williams go-ahead 3-pointer to go up 74-72 with 8:17 remaining in the fourth quarter. The lead would stretch to 81-76 after a second 3 from Tatum.
San Antonio used a 15-7 run to regain a 91-88 advantage following back-to-back baskets with 47.4 seconds left to play, as they iced it with free throws the rest of the way.
It marked the second straight season Boston overcame a huge deficit against the Spurs. The Celtics climbed themselves out of a 32-point hole to beat San Antonio 143-140 in overtime back on April 30. Boston couldn't finish the job this time around as they failed to make a field goal in the final 3:21 and couldn't stop the Spurs' rally in the end.
The Celtics will look to her back on track after a two-game losing streak, when they travel to Toronto to take on the Raptors Sunday night.
Joel Pavón
Follow @Joe1_CSP