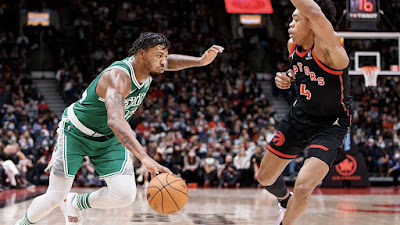 The Celtics wrapped up their Thanksgiving weekend with a 109-97 victory over the Toronto Raptors Sunday night at Scotiabank Arena, to snap a two-game skid.
Marcus Smart had a team-high 21 points, including 4-of-10 from deep, plus eight rebounds and six assists to help Boston bounce back after losing at San Antonio Friday, when it allowed the Spurs to score the final 15 points -- despite coming back from being down 24.

"The way we lost that game was definitely tough," Smart said to reporters following the win. "To be able to come back and respond the way we did just shows growth. I know we get up here and say that a lot, but it's true."

Josh Richardson returned from missing the last three games with a non-COVID related illness, to score 18 points off the bench in some meaningful minutes, and with Dennis Schröder (ankle) out.

"To get 27 minutes and 18 points of production from him is huge, obviously, especially with Dennis being out," said coach Ime Udoka postgame.

Al Horford recorded a double-double of 17 points, 11 rebounds, while Jaylen Brown added 16 for the Celtics, who are now 11-10 and have won four of their last six. Grant Williams (15 points, five rebounds) and Enes Kanter (nine points, 10 rebounds) combined for 24 points and 15 boards in place of Robert Williams (illness).
However, it was All-Star Jayson Tatum that found a way to contribute without scoring, as the All-Star forward was struggling from the field -- shooting 2-of-16 overall and 1-of-5 from behind the arc to finish with just eight points -- but he did grab seven rebounds and dished out a season-high 10 assists on the night.

"He didn't have the greatest shooting night, obviously, but 10 assists, we'll take that every time," said Udoka of Tatum after game.

Playing without OG Anunoby (hip) and Gary Trent Jr. (calf), Toronto was led by Fred VanVleet's 27 points in 8-of-16 from the floor and 5-of-10 from 3-point range. Rookie Scottie Barnes had 21 points and Pascal Siakam added 18 for the 9-12 Raptors, who have lost sixth of their last eight outings.
The Celtics hit 19 straight free throws in the first half, which kept them alive after shooting only 34.1% from the field to barely have a 54-51 advantage at the break, while also giving up 15-2 fast-break points on 11 turnovers.
Boston used a 9-0 run to take a 93-83 lead with 8:00 left to play, before extending it to 98-85, the largest margin of the game with 6:21 remaining. The Celtics held Toronto to just 12 points the rest of the way to beat the Raptors for the second time this season.
Udoka was not only pleased with the C's defense in the second half -- forcing 12 turnovers (18 overall), but the offense as well (committed zero turnovers in the last two quarters), with Tatum being the primary playmaker.

"Be the guy that's gonna bait guys out there," said Udoka of Tatum's impact. "Be the decoy to some extent and draw that crowd and you see everybody else pretty much ate off of him tonight. So credit to him for playing the right way, not getting frustrated and then sticking with it."

The Celtics return to TD Garden on Wednesday night to host the Philadelphia 76ers (10-10) for the first time this year.