Jaylen Brown talks about not being 'super happy' in return, honoring Terrence Clarke 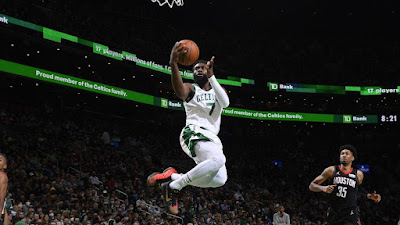 After missing eight straight games due to a right hamstring strain, Jaylen Brown made his return with a bang in the Celtics 108-90 win over the Houston Rockets Monday night.
The All-Star wing shot 6-of-13 shooting from the field and 3-of-6 from deep in an impressive performance in only 23 minutes of limited playing time. But what got the TD Garden fans to erupt was at the start of the third quarter when the Celtics were in a middle of a 17-0 run in which Brown scored 10 straight points in just over a minute that all started with a pair of made free throws and was capped off with back-to-back 3s in transition.
Brown scored 12 of his 19-point total in the third and showed no signs of rust, despite a two-and-a half week layoff. But even though the blowout victory served as a great test for the veteran guard, he didn't seem very much enthused when asked about how his body felt after the game.

"It felt good to be back out there just being with my teammates and competing," Brown told reporters during his postgame presser. "I didn't feel my best out there. I felt good all the way going up into the game and had a little bit of tightness [at the start of the game]. But we'll see how I feel [Tuesday] and keep building. I wasn’t super-happy with how my body felt. We're working through it."

Still, Brown is hopeful he'll be back to 100% sooner rather than later, noting how this injury differs from past hamstring run-ins.

"This is a little bit of a nagging injury, said Brown. "I've had a hamstring injury a few times now. This one seems to be lingering now a little bit."

"I think that in the next coming days, I’ll get back to feeling 100%, and we'll get back to adding some wins. This group has played extremely well while I've been out. I've seen a lot of steps forward from a lot of guys that makes me excited about our potential. I just want to continue to add value, play off those guys and keep winning games."

Brown was also asked about the memorial on Sunday that honored the late Terrence Clark, a Boston native that tragically died in a car accident this past April, just prior to this year's NBA Draft -- where he was expected to take his basketball journey to the professional level.
Multiple Celtics players -- including Brown -- attended the ceremony at the Vine Street Community Center, where Clarke grew up working on his basketball skills before he went on to Duke University and became an NBA prospect. The basketball court at the community center reads "TC 5" in a blue heart.

"It meant the world to me," Brown said about participating in Clarke's memorial. "Obviously a lot of emotions for everybody. Some of the things that you might have been distracted by and then being able to celebrate him brings all those emotions back to the front. He's not around, he's not here, and things like that.

"It isn't fair. That's what sucks about it. … We have a saying that we say in our family that energy lasts forever. We truly believe that if we keep speaking his name and remembering him, that energy is still gonna be around. So Terrence is no longer here with us today but as long as I'm here a piece of him lives with me and a piece of him lives in all of us. So I’m gonna continue to celebrate him and his family for giving us Terrence, because he was a great kid, man, he really was."

The tragic news of Clarke shook the basketball world, as he was a top prospect to enter the league and had just signed a deal with Klutch Sports just days before being pronounced dead at the hospital after colliding with another car in Los Angeles following a pre-draft workout.
Brown, who was a close friend of Clarke, says he plans to remain involved with the surviving family members.

"His mom and my mom are really good friends," Brown said. "They hang out, they come to my mom's house a lot. His little brother Gavin, we like hanging out together. So, we'll definitely be around."

The Celtics will look to extend their win streak Wednesday when they host the Brooklyn Nets in the final game of their homestand.
Joel Pavón
Follow @Joe1_CSP