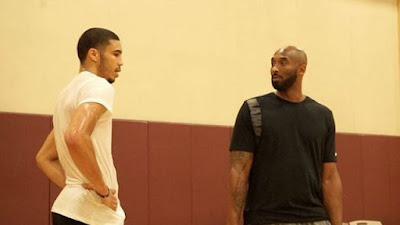 Celtics fans were not too pleased this past summer when All-Star Jayson Tatum put on the purple and gold colors of his idol Kobe Bryant's jersey during a NBA's 75th season photoshoot.
Tatum, who grew up a huge fan of Bryant's, was recreating the Lakers icon's buzzer-beater over Dwayne Wade and the Miami Heat from 2009, while pictures were being taken.

On Wednesday, Tatum was asked if it was "weird" wearing Bryant's jersey this past offseason, ahead of the Celtics matchup against the Lakers.

"Obviously everybody knows I loved the Lakers back then," Tatum emphasized, following Boston's 110-99 loss to the Atlanta Hawks. "Not the case now.
"But I kind of felt like a kid in that moment. Because that's what I used to do. I used to wear that jersey and run around the house and try to be like him."

Despite what Celtics fans may think seeing Tatum in a rival's jersey, the 23-year-old forward understands the history of the team he use to root for as a kid and the one he currently plays for -- and what most believe will continue for years to come.
Still, Tatum doesn't get lost in the past and knows how special it is to be a small piece of an historic rivalry between two franchises that both have 17 championships each.

"Everyone knows the history between the two franchises, and I've been fortunate enough to be a part of that going on five years now," Tatum said postgame Wednesday night. "And I obviously understand who they have on their team -- especially in somebody like LeBron [James], that is one of the best to play this game -- so obviously as a kid those are the matchups that you dreamed about and you don't take for granted when you get the opportunity. As a competitor, you love games and you love moments like that."

It wasn't that long ago when a former Celtics captain, Hall of Famer and a top-75 player of all-time grew up a Lakers fan only to become a champion and legend in Boston.
What was his name again?
Celtics and Lakers tip-off tonight at 7:30 PM ET on ESPN.