Jaylen Brown to sit out Saturday against Mavericks 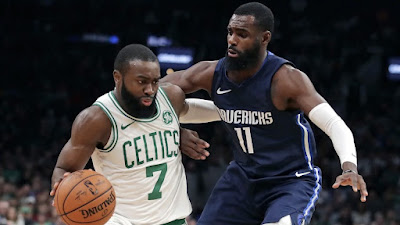 After leaving in the blowout of the Celtics' 95-78 win over the Miami Heat with right hamstring tightness, Jaylen Brown has been ruled out for Saturday's matchup against the Dallas Mavericks.
At the end of the third quarter Thursday night, the All-Star wing collided with Duncan Robinson. Brown was seen limping into the locker room and didn't return.

Here's a closer look at the play that sent Jaylen Brown to the locker room with right hamstring tightness pic.twitter.com/13e7AuFPhi


After the game Celtics coach Ime Udoka offered an update on Brown, who scored a team-high 17 points, to go long with five rebounds, two assists and a steal.

"He had some tightness in his hamstring," Udoka said to reporters postgame. "He has a little history of some stuff over there, so we wanted to be cautious and he'll get checked out. We'll know more tomorrow."

#NEBHInjuryReport for tomorrow vs. Dallas:

Josh Richardson, who sat out against the Heat with a left foot contusion, has been listed as questionable when the Celtics take on another one of his former teams in the Mavs.
With both veterans potentially sidelined, look for Udoka to rely more on Romeo Langford and Aaron Nesmith come Saturday in Dallas after both made major contributions against Miami.
Joel Pavón
Follow @Joe1_CSP