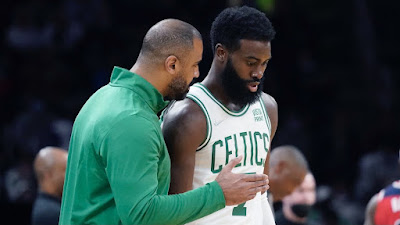 Celtics coach Ime Udoka didn't mince words following a 116-107 loss to the Washington Wizards Wednesday night at TD Garden.
While describing the performance of his roster as "disappointing," Udoka also called the inconsistent play of Jaylen Brown "mind-boggling" after the Celtics All-Star scored only 13 points on 5-of-16 shooting against the Wizards.
In four games played this season, Brown is averaging 11 points on a combined 8-of-26 shooting from the field and 1-of-11 from 3-point territory at home, while putting up 38 points on a combined 28-of-50 from the floor and 11-of-21 from behind the arc per contest on the road.
Udoka spoke on 98.5 The Sports Hub Thursday and doubled down on his postgame comments regarding Brown's inconsistencies so far this season and what needs to change.

"Just overall, bringing the effort that he demands of himself, that the team relies on him to bring," Udoka said on the Hub's Zolak and Bertrand Show. "Jaylen's one of the best players in the league, and he holds himself to a high standard, as well as myself and the rest of the team. He knows when he's not playing up to his capabilities, and we talked about that before the game, after the game, and throughout the year it's something we'll keep touching on."

Speaking to reporters on Friday after shootaround, Brown addressed his up and down play during the first week of the regular season, especially at home against the Raptors and Wizards where he committed a combined eight turnovers in both games.

"I've noticed in the last couple of days, four games for me now; my body hasn't recovered the same," Brown said in his post practice presser. "Ever since, I've been talking to our medical staff about that. I feel great and then instead of playing one game, it kind of feels like I've played three. I'm used to my body responding and recovering a lot faster. I know I just turned 25 but this can't be what it looks like on the other side."

Brown, who tested positive for COVID-19 during training camp, expressed concern to the Celtics training staff upon being cleared from the NBA's Health and Safety Protocol.

"I talked to them and that's definitely a side effect or a symptom," Brown added. "My breathing was more of my concern and I'm breathing fine. But, I'm just not recovering as fast as I would like and I’m having some joint pain and that’s a part of COVID, as well -- some increased joint pain. So, I think that's a part of it and as I continue to fight through it and continue to play more games and get the right stuff into my system, it'll get better. Right now it has been inconsistent and it’s obvious. But, my body hasn't felt the same."

As for Udoka's remarks after the loss to the Wizards, regarding Brown's play this season especially after a 46-point explosion to set a new career-high in the season opener against the Knicks and 30-points scored in a comeback overtime win in Charlotte, the Celtics wing responded to his coach's evaluation.

"I didn't see it. Ime came in and talked to me today and yesterday, and it didn't bother me," Brown replied. "It's mind-boggling to me, too. I was surprised that my body didn't respond the way it normally responds. Usually, I'm able to have that zip, that pop flying up and down the court and it just wasn't there. So, I think that was obvious. I don't think he was out of line, or anything for that. I got to be better and I got to get with my medical staff and figure how to get my body to the point where I recognize it where I feel normal.

"Some days I feel fantastic, then it's like 2-3 days, it takes my body too long to get back to feeling fantastic again, and that's an issue for me."

Udoka has also placed blame on himself for not always putting Brown in the best of situations to succeed. However the Celtics new head coach stands by what he has said about Brown and the team's overall effort during their 2-3 start.

"As far as Jaylen, something I have to do a better job of [is] getting him involved and getting him to certain places on the floor," Udoka said Thursday afternoon. "But at the same time, like I said, he knows when he's not playing up to his level, and Jaylen's a very smart young man, and he knows what he has to bring every night and how much his team relies on him."

The Celtics will look to get back to .500 when they face the Wizards once again Saturday night in a home-and-home at Capital One Arena.
Joel Pavón
Follow @Joe1_CSP