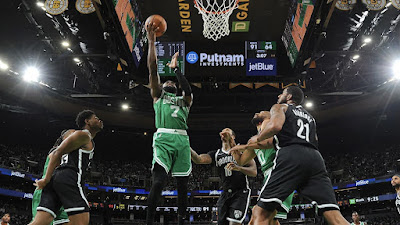 The Celtics were riding a season-high three-game win streak before being brought back down to reality in a 123-104 blowout loss to the Brooklyn Nets Wednesday night at TD Garden.
After leading the NBA in overall defensive rating in their last 11 outings, Boston allowed 50.6% shooting from the field and 40% from 3-point territory, while only hitting 37.4% of their attempts and 11-of-48 (22.9%) from deep against the Eastern Conference leaders.
Marcus Smart scored a team-high 20 points to go along with eight assists, but Jayson Tatum (15), who was averaging just over 33 the last four games, and Jaylen Brown (13) combined for only 28 points on 10-of-31 from the floor and 1-of-17 from behind the arc for the Celtics, who fell to 10-9 on the season.
Playing without Robert Williams and Josh Richardson -- both out with a non-COVID related illness -- Boston fell behind by double-digits in the opening quarter and never recovered to wrap up their four-game homestand at 3-1.

"I told the group, 'Good homestead, but it could've been a great one.'" said Celtics coach Ime Udoka after the loss. "It was the first game in awhile where we got out-hustled and out-worked."

Patty Mills finished with a game-high 23 points, which included hitting 7-of-10 from long-distance. Kevin Durant had 21 points and James Harden recorded a near triple-double of 20 points, 11 rebounds, seven assists. LaMarcus Aldridge netted 17 points and also grabbed nine rebounds for the Nets, who are 14-5 on the year.
The Celtics trailed by 11 midway through the first period before the deficit grew to as many as 17 in the second and they were down 62-49 at the half. Brooklyn scored 18 of the first 21 points in the third quarter to take a 97-68 lead -- the largest of the night, as Boston scored the last eight points of the quarter to trail by 21 heading into the final frame.
The C's looked to attempt one last rally after using an 8-0 run to start the fourth and cut the the Nets' lead 97-85 with 9:23 left to play, but that was the closest they would come the rest of the way.

"They came out the more aggressive team. We gave them too much respect in my opinion, said Al Horford in his postgame presser. "They are what they are, they're a good team. It's a good learning experience for our group.

"When I was out there it felt like we were taking good shots, but it does feel like we need to put more pressure on the rim."

This was the first meeting between these two teams since Boston was eliminated 4-1 in the first round of the playoffs by the Nets back in May. The last time Brooklyn visited the Garden, was Game 4 of that best-of-7 series, where former Celtic Kyrie Irving went off for 39 points. At the conclusion of that performance, the All-Star guard, who hasn't played this season due to not complying with COVID-19 mandates in the state of New York, appeared to stomped on the Celtics logo at center court, before a fan tossed a water bottle that nearly hit him as the team was walking into the players' tunnel.
The Celtics will head out on the road Friday after Thanksgiving to face the San Antonio Spurs (4-13) and then travel to Toronto Saturday for a second night of a back-to-back.

Boston assisted 25 times on 34 made field goals and outscored the Nets 40-38 in the paint, but were outrebounded 50-45 and committed 11 turnovers to Brooklyn's 10.
Joel Pavón
Follow @Joe1_CSP